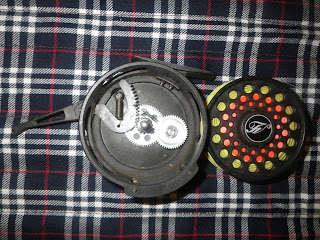 Inside view of the carbon fiber Vivarelli 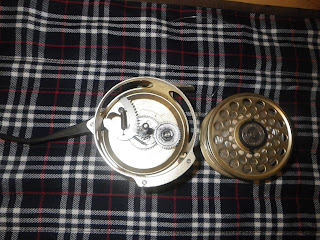 Inside view of the Goldstar 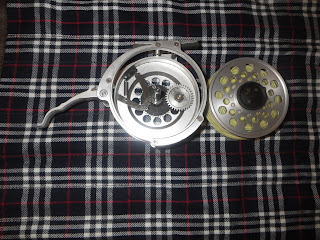 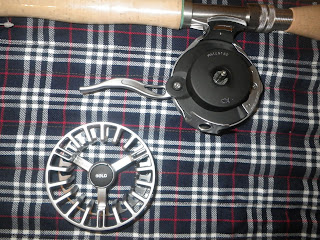 Inside view of the Bold


I came across this article about the JMC semi automatic fly reel being used for nymphing as well as dry fly. It is relatively inexpensive (99.00€).  These reels are made from graphite and are NOT the same as the heavy automatic fly reels of 30 years ago.  The JMC reel is rated for five weight fly line.

These reels do not have handles for reeling the line, but rather a lever parallel to the rod which winds the line with the help of springs - similar in principle to a wind-up toy car. They come with the same braking mechanism as a classic fly reel, and can be used for both dry and wet-fly fishing as well as for classic and French-leader nymphing. In most configurations, they can of course also be used for lake fishing.

For most dry and wet-fly fishing, a constant fly line length is usually used in order to systematically fish the whole river current. When retrieving a fish, the line is pulled in by hand (the reel's springs aren't strong enough to pull in the fish), and after landing the fish a few slight touches on the lever rewinds the line into the reel. While wading to a referee, the line doesn't get in the way or get dragged behind. Reeling with the lever is about three-times as fast as reeling with a handle, which can play a major role in competition. The winding speed is constant, and can be controlled by the number or length of lever presses.

In classic nymphing, this reel is similarly useful. For French nymphing, various cast lengths rather than constant line length are generally used. Slack in the line is reeled in with just one finger on the lever, something not possible with normal reels which require the second hand for winding.

The one minor disadvantage of this reel is that the lever may bother some fly-fishers. Some of the Czech juniors took a while to get accustomed to it, but afterwards praised the ease of use, which contributed to them taking home the title of World Champions!