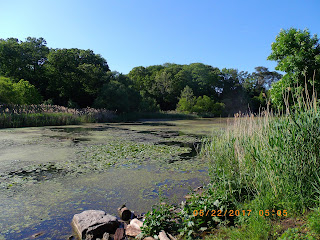 It is well into spring time but I am having difficulty locating places to fish.  Algae
seems to cover the surface of many lakes and ponds in New York City.  I went to
a few of the kettle ponds in Queens.  Oakland Lake  has a healthy population of
bluegills.  However, for most of the fishing season there is a thick carpet of algae
on the lakes surface; making fly fishing almost impossible. 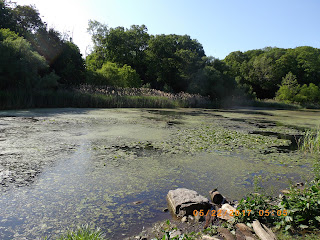 Originally formed as the result of glacial action during the Ice Age 15,000 years ago, Oakland Lake is a kettle lake, part of the Alley Pond Park system in northeast Queens. It is surrounded by glacial boulders and is fed by underground springs and a ravine that flows into the lake from the south. The lake served several purposes until it was transferred to New York City’s Parks Department in 1934.
The Parks Department notes:
“In the 1930s, Works Project Administration (WPA) workers lined the brook feeding Oakland Lake with blocks, and later, the brook and a small pond leading into the lake were filled. In 1941 officials from the Sanitation and Health Departments worked with WPA workers to fill in nearby wetlands in an attempt to control the mosquito population. Three thousand people were put to work at nine Queens sites laying pipes, digging drainage ditches, and filling in and grading low areas.”
Posted by The Great Lakes of NYC at 2:56 PM