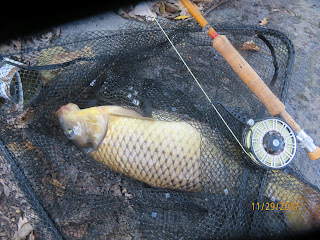 My second carp campaign for the month was at Loeb Lake in Central Park.  The campaign was daily chumming a specific part of the lake with ground baits like corn, oatmeal and bread crumbs for at least five days.  From my past experience I know that carp like to feed in this area between 1:30pm and 4:00pm. 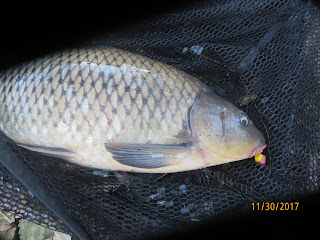 Early in this campaign I tried fishing 3:00pm and 5:00pm.  My catch rate went down.
The air temperature began to drop and feeding stops regardless of how much chum is put
in the water.  But before 4:00 o'clock, whenever the air temperature is near fifty degrees; keep your line in the water. 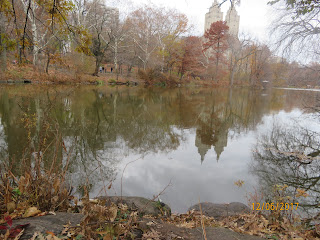 I'm thankful that the wind was calm.  I put out a buffet fit for a carp.  The algae has disappeared.    However, there are no signs that fish are in this area at all.  No bubbles, no swirls; not even a turtle or a catfish can be seen this afternoon.   With these conditions, If there is no activity it could mean that something has spooked the fish. 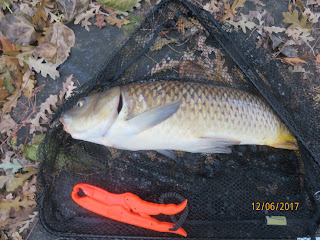 After four days of chumming, a weather front passed and the weather got colder.  I did not resume
chumming until the warmer temperatures returned several days later.  I picked up where I had stopped, bread crumbs, corn, and oatmeal.  The first carp I caught seemed to have deformed mouth.  It was missing the lower lip. That made it difficult to use the fish grip to hold the fish.  I tried about four times and each time the grip would slip off. 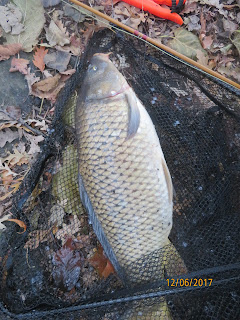 Fortunately, I brought my big net and used it. 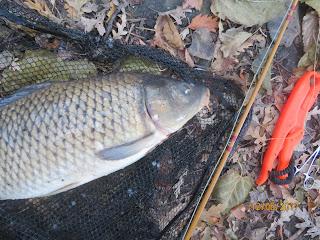 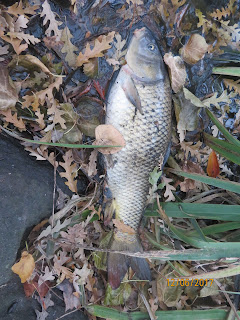 Knowing how carp behave is essential to catching carp.   Aside from the behavior exhibited when carp spawn in the spring, I know almost nothing about carp in Brooklyn.  That is the reason I have not caught more carp in Prospect Park Lake. 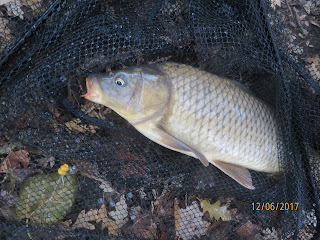 It is just the opposite at Loeb Lake.  When air temperature is fifty degrees or in that area, I know that carp will be active in the afternoon before four o'clock. 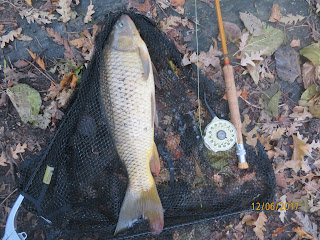 I hope there is another warm spell.  I would like to be able to catch carp this winter.