A day in the Parks 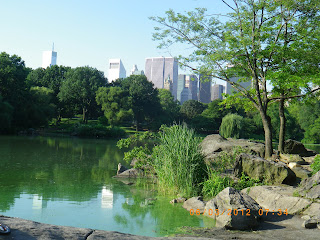 Me, Dennis and two buddies who expressed an interest in learning to fish for carp,
went to central Park .  We met at eight or so.  There were turtles sunning themselves
on rocks and other things in the water.  The forecast called for thunder storms and some
rain. 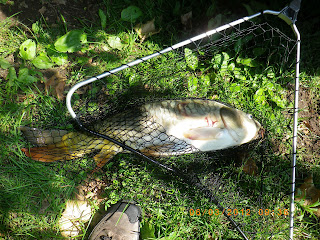 Dennis put out a few dog biscuits.  I threw some corn pellets into the water.  We saw very
little indication that carp were actively feeding . Carp were in a spawn mode.  There was
the usual jumping and bumping going on here and there.  As I talked to Dennis my rod
jerked violently and fly line moved across the lake in a northerly direction. 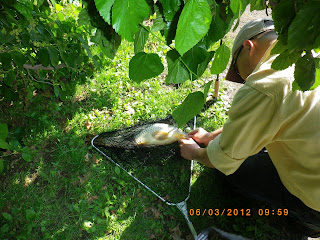 My first carp of the morning, testing my new 10 foot 5 wt from March Brown Ltd.
As the carp turned and headed east across the lake, I moved with him.  There were brutal
head shakes and long runs.  Directions were changed and my rod bent to accommodate
these moves.  I was really glad I had not brought the 2 wt!  Finally I netted an almost
white mirror carp.  I had never seen one with this coloration.  Dennis hooked and netted
a carp.  It was his first of the year. 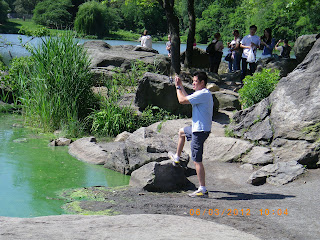 With that out of the way, we got Steve and John set up to catch carp on their ultra light
spinning rods.  John got the first one.  He is pictured above grinning from ear to ear.
There is no facial expression like the one you get after you land your first carp. 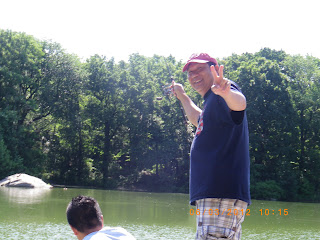 Here Steve draws blood with his first ever carp.  After Steve got his carp in.  John
wet his line again and hooked another carp. 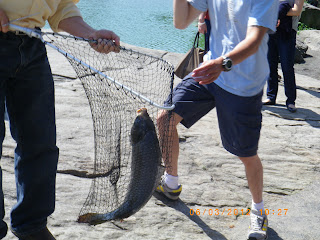 This is one of John's bigger carps. 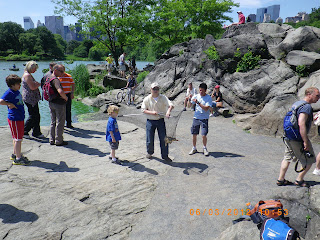 Dennis was the net caddy as the rookies got a big dose of carpitis; for which there
is no known cure.  Note the crowd of tourist watching the spectacle.  When the crowds
increased we decided to go to Queens to fish at Kissena Lake. 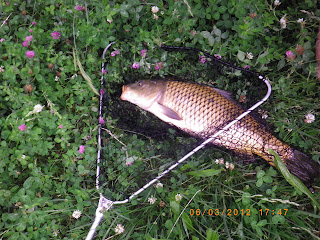 I caught a third carp at Kissena.  Kissena Lake has a healthy carp population; known
for big powerful fish that readily take bread and corn. 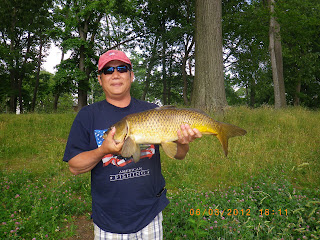 Steve with his third and biggest carp of the day,  Not bad for a rookie with an ultra light
spinning rod.  Note the "I just caught a carp grin". 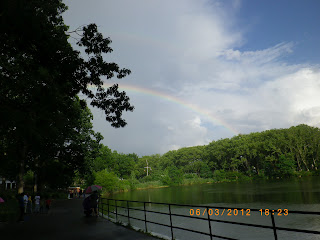 The forecast was right, a thunderstorm did pass.  But a rainbow appeared afterwards. 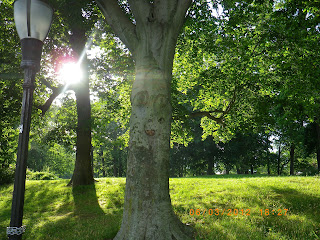 If you look closely you will see that this tree has a face.  I don't know why or how. 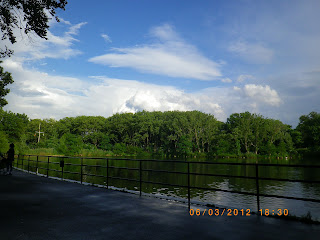 We finished the day having caught a total of 12 carp and an unknown number of small crappie.
Posted by The Great Lakes of NYC at 8:24 PM