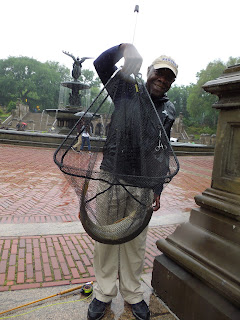 Me and Jay met today to fish for carp in New York City's Central Park.   There are five lakes
in this park.  Loeb Lake is the most popular due to the ease of access via public transportation.
The subway almost takes you to the lake's edge.  It was about sixty degrees when we arrived.
After an hour later, it started to rain.  It was spritzing for awhile and then the rain became steady. Slowly we began to get soaked.  We kept on fishing .  Water dripped from the brim of my hat.
I caught my second carp of the season in my new Promar net. 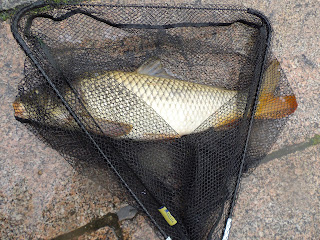 Jay on the other hand began to hook catfish after catfish.  He caught more
than a dozen in the steady rain.  Fortunately the air temperature rose which helped
to keep the day from becoming miserable. 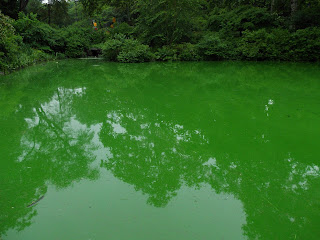 You are looking at a problem, algae bloom.  Any time the temperature is greater than 70F.  The City of New York has this recurring problem in a number of lakes.  They refuse to try and control it with
aerators.  This part of Loeb Lake is called Wagner Cove in honor of former New York City Mayor
Robert Wagner.  There were carp feeding in this slop.  Some carp would sip this green glop
from the surface.  Fishing here was impossible because even dry flies could not be seen
while floating on the surface. 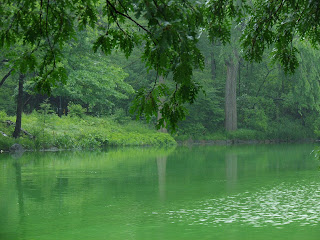 The lake looks like it has been covered in green oil.  It was especially thick in the cove. 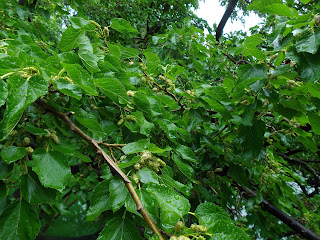 Mulberry time in the city. 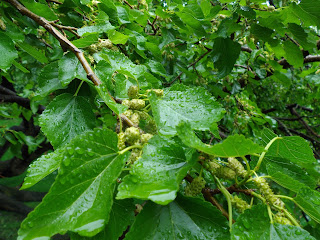 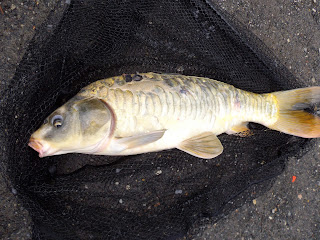 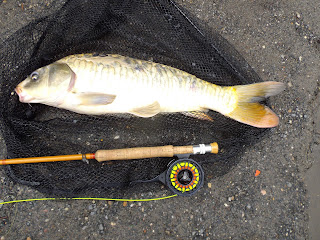 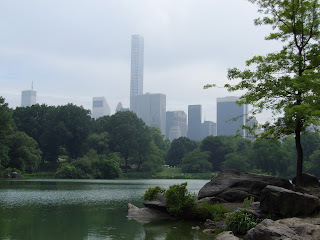 The ugliest building in the city, is this ninety story monstrosity which overlooks everything
including Central Park. 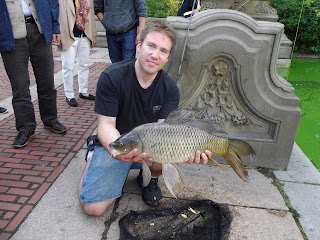 Jay finally caught a carp after it stopped raining and our clothes had completely dried in the afternoon.  note: this is a fantail carp (rare) 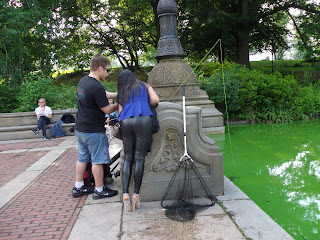 Yes there are carp groupies!


Freshwater algae blooms are the result of an excess of nutrients, particularly some phosphates.[2][3] The excess of nutrients may originate from fertilizers that are applied to land for agricultural or recreational purposes. They may also originate from household cleaning products containing phosphorus.[4] These nutrients can then enter watersheds through water runoff.[5] Excess carbon and nitrogen have also been suspected as causes. Presence of residual sodium carbonate acts as catalyst for the algae to bloom by providing dissolved carbon dioxide for enhanced photo synthesis in the presence of nutrients.
When phosphates are introduced into water systems, higher concentrations cause increased growth of algae and plants. Algae tend to grow very quickly under high nutrient availability, but each alga is short-lived, and the result is a high concentration of dead organic matter which starts to decay. The decay process consumes dissolved oxygen in the water, resulting in hypoxic conditions. Without sufficient dissolved oxygen in the water, animals and plants may die off in large numbers. Use of an Olszewski tube can help combat these problems with hypolimnetic withdrawal.
Blooms may be observed in freshwater aquariums when fish are overfed and excess nutrients are not absorbed by plants. These are generally harmful for fish, and the situation can be corrected by changing the water in the tank and then reducing the amount of food given.