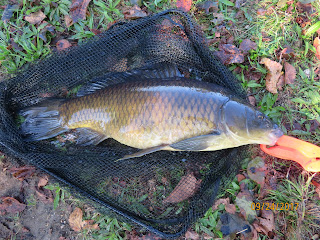 I have an old friend who lives in the Watertown near Boston, Massachusetts. Usually, once a year, I go up to see him for a leaky canoe ride and some fishing. This year was the first time since
I ruptured my quadriceps muscle in 2013 that I was able to go and see him. . 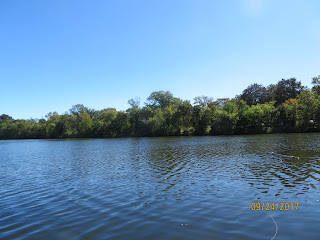 The air temperature was above 85F. in the afternoon.  Fishing was slow and it was humid.
Once the wind stopped blowing I could see fish were feeding. The last time I fished here
I hooked 6 carp and landed 4 in less than three hours. 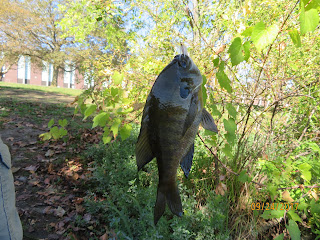 The day before I had to fish long and hard just to get two nice bluegills.  I used a white
wooly bugger. 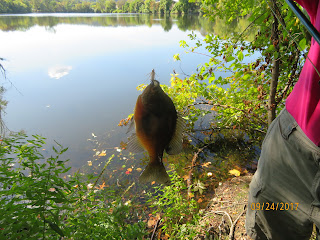 Clay Pond has limited access points and it was hard to fish through the bushes that lined the banks.
I plan to bring hedge clippers if I fish here again.  I was able to do a little wet wading. The shore line is hard and there was no danger of me sinking in mud and dead rotting vegetation. 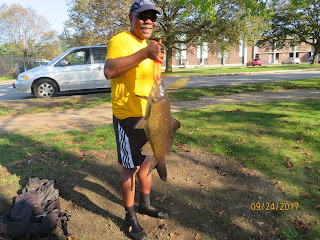 This is a nice example of the carp in this Clay Pit.  This carp took my fake corn "pop up".
I used a 7wt, fly rod with Rio LT trout line which came in handy due to the lack of room for
backcasting.  This carp took more than 15 minutes to get it in my net!
I was very happy I brought my seven weight. 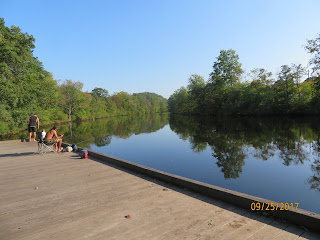 Later that afternoon, down on the fishing deck on Charles River.  The river was clear with
a few lily pads.  With the humid weather it was ideal wet wading weather.  But no one
was catching fish due to the heat. 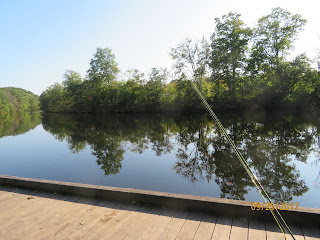 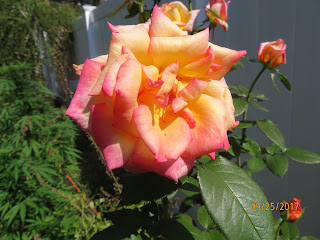 Clay Pit Pond, also known as Claypit Pond, is a pond in the Boston suburb of Belmont in Middlesex County, Massachusetts situated between Concord Avenue and Belmont High School. It is a man-made pond, excavated as the source of clay for industrial brick-making on the site from 1888 to 1926. The Pond was formed in 1933 when the Wellington Brook was redirected to flood the site, making it an essential part of the drainage system for much of Belmont.
The Parry Brothers first opened a brickyard in the vicinity of the current Pond in 1888. In 1900, nearly all brick making operations in Middlesex County were merged into the New England Brick Company,[1] which acquired the site and increased production to 15 million bricks per year with a work force of 75.[2] By 1926 the highest quality clay was exhausted and the site was abandoned, reportedly leaving behind an 1884 Marion steam shovel at the bottom of the pit.
The Town of Belmont purchased the abandoned pit in 1927 for $22,500 to use as a waste dump site. However in 1933, the Town diverted the Wellington Brook through a culvert to flood the site with 80 million gallons of water, creating the Clay Pit Pond.[3]
In March 2010, the pond overflowed onto the road after two days of rain, closing down the adjacent high school.

Spy Pond is a short drive from the Clay Pit.

Spy Pond and environs. The rail line on the right is now the Minuteman Bikeway.

Fifty thousand years ago, the area of Arlington where Spy Pond now sits was covered a mile deep in ice by the Wisconsin Glacier. Fifteen thousand years ago, the ice began to recede, leaving depressions or "kettle holes" in its wake. Initially filled with water from the receding glacier itself and then by natural runoff, the kettle holes eventually formed small lakes and ponds throughout the area.
Spy Pond is now fed by a combination of groundwater and surface runoff from the surrounding area. Spy Pond currently has an average depth of 12 feet (3.7 m) and a maximum depth of 36 feet (11 m).
The pond has a two-acre (0.8 ha) island, Elizabeth Island, which was privately owned (but undeveloped) until 2010, when Arlington Land Trust (in collaboration with the Massachusetts Audubon Society) agreed to purchase the property and set it aside for conservation.[3]

On April 19, 1775, Mother Batherick, an elderly woman who liked to gather dandelions by Spy Pond, managed to corral and take prisoner six Revolutionary War Redcoats who were fleeing their captured supply train.[4]
In 1850, the Spy Pond Water Company began piping water to West Cambridge. The Spy Pond Water Company changed its name to the Arlington Lake Company when West Cambridge was renamed Arlington in 1867.

Ice harvesting at Spy Pond, from an 1854 print
During the Civil War the Union Army conducted training at Camp Sheppard near Spy Pond and following the war civilian rifle matches were conducted by the Massachusetts Rifle Association from 1875 through 1876 before their move to Woburn, Massachusetts.
The 19th century also saw Spy Pond become an industrial center as entrepreneurs sought to harvest the benefits of this natural resource for export. Spy Pond became a source for ice in the winter, cut into huge blocks for shipping, and pure water for nearby Boston in the summer. Businesses shipped Spy Pond ice as far away as India,[5] installing huge amounts of infrastructure and equipment in the Arlington area in the process. This led to the development of the local railroad and large-scale manufacture of ice tools.
In the 1970s, the Wetland Protection Act was passed classifying Spy Pond as a great pond under Massachusetts law. Despite this classification, the Commonwealth of Massachusetts uses Spy Pond for drainage from Route 2, resulting in what Cori Beckwith, administrator of the Arlington Conservation Commission, describes as a "slightly hazardous" sandbar and states that "its [sic] costly" to remove.[6]

Bird enthusiasts have tracked the native and migratory bird populations of Spy Pond for a number of years. They report that almost one hundred and twenty species of birds make their home in and along its shores at some point in the year. This list includes 32 swimmers and 86 non-swimmers.
Among the bird population, Canada geese are the most notable and controversial residents.

Spy Pond was stocked with fish through the 1990s, but budget cuts have meant no stocking since then.[7] The pond contains a variety of species, including American eel, bluegill, carp, largemouth bass, white perch, yellow perch, pumpkinseed, black crappie, white crappie, and tiger muskellunge.[8] However, according to Rodney Zukowski, owner of Arlington Bait and Tackle, given the 10–12 year lifespan of tiger muskellunge and their inability to reproduce, it is believed Spy Pond no longer contains them, as the last stocking was over 15 years ago. Bucket biologists [1] have illegally introduced northern pike in the last few years, some reaching more than 40 inches.[citation needed]

An old Spy Pond legend tells a tale of a Komodo Dragon purchased off the black market in 1990 and released onto Elizabeth Island in the middle of Spy Pond. Children of Arlington affectionately refer to this cryptid as "Lizzie" or "The Spy Pond Monster".