Smallmouths on the fly, Rondout Creek 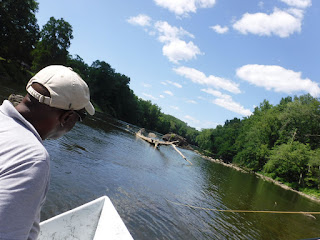 That tree is where several smallies were holed up during this hot summer afternoon.
I had spent the morning trying to find carp.  But they were as illusive as ever.  We saw bubbles
and nothing else.  This part of the Rondout Creek is shallow, with riffles. 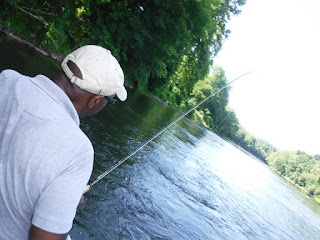 I was guided by my Official Guide, Ray Ottulich.  I have fished with Ray many times and I highly recommend him.  RAY OTTULICH Orvis-Endorsed Fly-Fishing Guide. 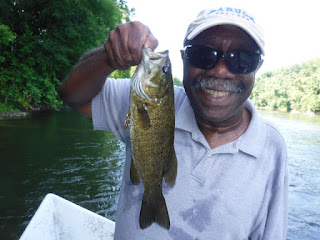 The fishing didn't pick up until after 3pm, which was to be expected; the water temperature was
85 F.  When the sun began to set I saw panfish coming from out of no where.  Bass began to take flies. I got lucky with a cone head fly and hooked this fish on the west side of the pool.  The water was shaded and a little deeper there.  The fish pulled almost like a carp and I could hear my drag as it tried to pull away.  This was the biggest of the seven fish I caught. 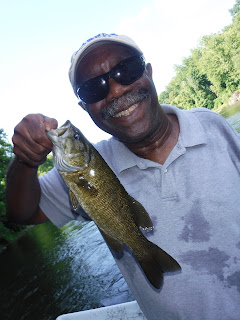 Rondout Creek is a 63.3-mile-long (101.9 km)[3] tributary of the Hudson River in Ulster and Sullivan counties, New York, United States. It rises on Rocky Mountain in the eastern Catskills, flows south into Rondout Reservoir, part of New York City's water supply network, then into the valley between the Catskills and the Shawangunk Ridge, where it goes over High Falls and finally out to the Hudson at Kingston, receiving along the way the Wallkill River.
The name of Rondout Creek comes from the fort, or redoubt, that was erected near its mouth. The Dutch equivalent of the English word redoubt (meaning a fort or stronghold) is reduyt. In the Dutch records of Wildwyck, however, the spelling used to designate this same fort is invariably Ronduyt during the earliest period, with the present form rondout (often capitalized) appearing as early as November 22, 1666.[4]
It became economically important in the 19th century when the Delaware and Hudson Canal followed closely alongside it from Napanoch to the village of Rondout, now part of Kingston, which grew rapidly as the canal's northern port. Today it is important not only for the reservoir, but for the fishing and other recreational opportunities it provides.
Due to the Wallkill, it drains a vast area stretching over 1,100 square miles (2,850 km2) all the way down to Sussex County, New Jersey. The high mountains around its upper course and the reservoir, which collects water from three others, also add to its flow.