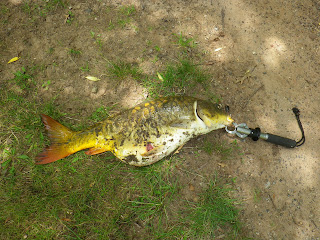 After spending about eight hours fishing in
New Jersey yesterday; I was on Staten Island
at 8:30 am. My reason for being there was
carp and mulberries. Mulberries are on the
trees here and carp love mulberries. 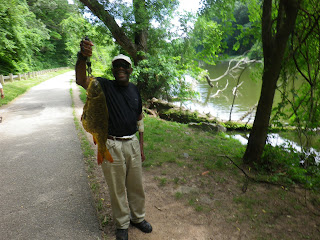 It turned out to be a long day. Carp were not
feeding on the berries this morning. So I put
some chum in the water. Nada. As the morning
turned into afternoon, I went to a spot were
I had seen carp before. 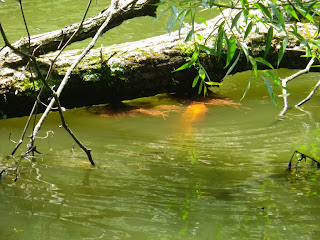 Carp and koi were in and out of this area as they
feed on what appeared to be an orange colored
root system growing from a willow tree branch
touching the lake surface. I threw a few corn
pellets in the water to get the attention of the
carp.

This area where fish were feeding had limited space
for fighting a fish and especially carp. So my plan
was to try to keep any fish from running wild.
Several times my line became tangled with under
water tree branches and twigs. I took the time and effort
to quietly remove each one until I felt there were
no submerged obstacles left. I was ready to fish. 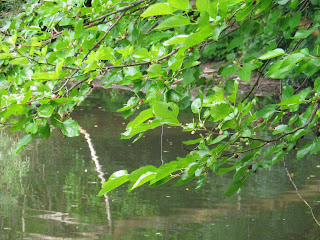 During this whole process I could see carp tailing
I knew that I would need to keep my rod tip low,
if I were to have any hope of controlling and limiting
the carp's first big run. A line caught on a branch
would cause me to lose whatever fish was on the
line.

The tailing carp were so engrossed in feeding
that they ignored my presence. I soon saw my
line tighten and begin to form a straight line.
I set the hook and an under water commotion
began! I could not let the fish have more than
a 15 foot radius in any direction. This meant I
had to move my rod tip in anticipation of the
carps movements. Keep the fish guessing.
My tactics worked and I was rewarded with a
big bellied mirror carp. They are rare, only my
second since 2004.
Posted by The Great Lakes of NYC at 2:56 PM