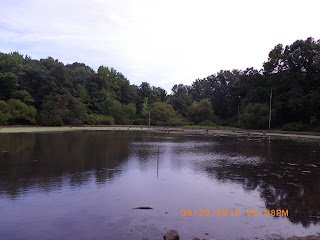 For years I have used Google Maps to look for new places to fish.  I never fished Kingfisher Pond,
a kettle pond, before because I believed this to be a Preserve. 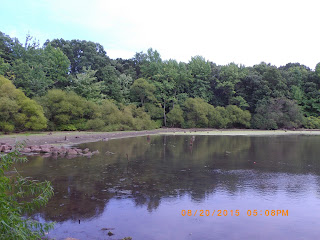 Kingfisher Park is named for the bird that eats fish here.  Eibbs Pond on Staten Island
is a kettle pond too. 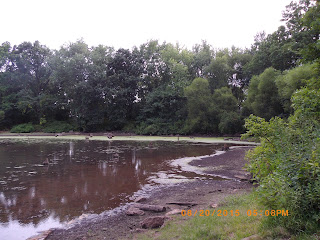 There are frogs, turtles, bluegills and a few carp here.  While I was not able to see the carp
there was clear evidence that carp live here.  I witnessed a few "emergency blows" as carp
become aware of something they did not expect to encounter. 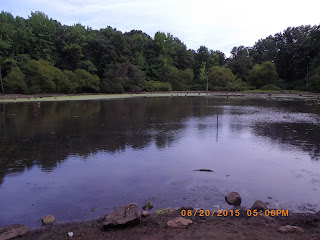 This pond is just as secluded as the other kettle ponds I 've fished. 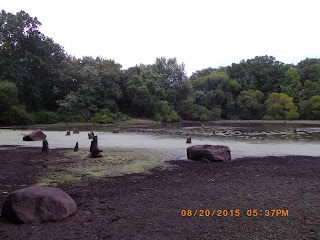 Kettles are fluvioglacial landforms occurring as the result of blocks of ice calving from the front of a receding glacier and becoming partially to wholly buried by glacial outwash. Glacial outwash is generated when streams of meltwater flow away from the glacier and deposit sediment to form broad outwash plains called sandurs. When the ice blocks melt, kettle holes are left in the sandur. When the development of numerous kettle holes disrupt sandur surfaces, a jumbled array of ridges and mounds form, resembling kame and kettle topography.[1] Kettle holes can also occur in ridge shaped deposits of loose rock fragments called till.[2]
Kettle holes can form as the result of floods caused by the sudden drainage of an ice-dammed lake. These floods, called jökulhlaups, often rapidly deposit large quantities of sediment onto the sandur surface. The kettle holes are formed by the melting blocks of sediment-rich ice that were transported and consequently buried by the jökulhlaups. It was found in field observations and laboratory simulations done by Maizels in 1992 that ramparts form around the edge of kettle holes generated by jökulhlaups. The development of distinct types of ramparts depends on the concentration of rock fragments contained in the melted ice block and on how deeply the block was buried by sediment.[3]
Most kettle holes are less than two kilometres in diameter, although some in the U.S. Midwest exceed ten kilometres. Puslinch Lake in Ontario, Canada, is the largest kettle lake in Canada spanning 160 hectares (400 acres). Fish Lake in the north-central Cascade Mountains of Washington State, USA, is 200 hectares (490 acres).[4]

A kettle in the Isunngua highland, central-western Greenland
The depth of most kettles is less than ten meters.[5] In most cases, kettle holes eventually fill with water, sediment, or vegetation. If the kettle is fed by surface or underground rivers or streams, it becomes a kettle lake. If the kettle receives its water from precipitation, the groundwater table, or a combination of the two, it is termed a kettle pond or kettle wetland, if vegetated. Kettle ponds that are not affected by the groundwater table will usually become dry during the warm summer months, in which case they are deemed ephemeral.[