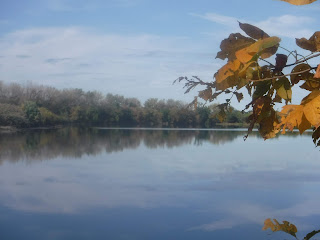 It has been several years since my last visit to Overpeck Creek Park in Teaneck,
New Jersey.  There are carp and sunfish. But on this visit I couldn't even buy a fish.
I'm finding that fishing gets slow at this time of the year.  Overpeck is 157 acres large. 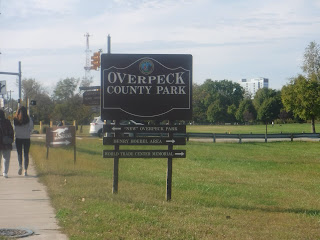 The first inhabitants of the area were Ashkineshacky Native Americans, who lived around Leonia. Approximately a thousand Native Americans had their seasonal activities, collecting shells for wampum and hosting their bath festivals in Overpeck Creek.[1]
In 1954, the president of the Bergen County Park Commission, A. Thornton Bishop, proposed a plan to build a county park. This park was originally planned to rival Central Park in New York City.[1]
In the 1950s, Leonia, Palisades Park, Ridgefield Park, and Teaneck donated municipal land for the development of the Overpeck County Park. During the 1970s, Teaneck's municipal government, under then-Mayor Eleanor Kieliszek, sold a 350-acre parcel of land to Bergen County, which was later incorporated into Overpeck County Park.[2]
Henry Hoebel Area was the first area to undergo development; the other areas remained undeveloped and were used as dumping sites for garbage and car tires until they posed environmental hazards to their surroundings. The park vicinity was notable being filled with solid waste. Ridgefield Park and Teaneck filed a lawsuit against Bergen County because the park land was not developed and used properly. The project began in 2003 and the expanded park opened in 2010.[3]
In 2002, the Teaneck Creek Conservancy and the Bergen County Parks Department began to establish a 46-acre (190,000 m2) environmental and cultural park as part of Overpeck Park.[1]
Posted by The Great Lakes of NYC at 10:52 AM