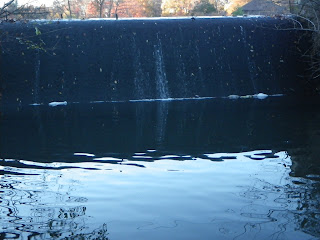 Quiet pool where carp hold. There is a Mulberry tree on the left. 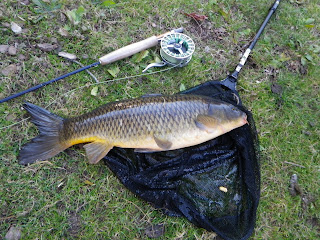 My first carp ever in the month of November. 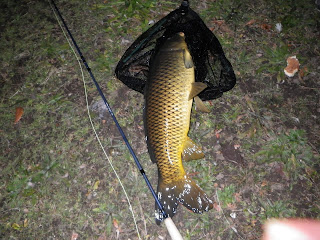 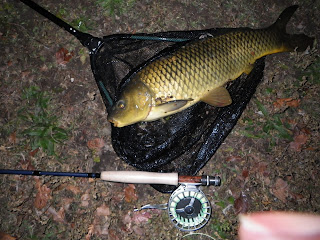 Another carp caught after 5:00 pm in the month of November

I went fishing for carp. I got to the lake at 11:00 am set up and began to look for carp. In spite of the warmer weather we experienced, there were no carp visible. Hour after hour nothing to be seen. It was as if all the fish had picked and moved to Florida for the winter. I thought to myself that this could be the last time I fish for carp until spring. The sun began to slowly sink into the horizon. Then one of those good for nothing Canada geese moved closer to the edge of the lake and by accident spooked a carp that was secretly feeding in that same spot. a giant wake headed toward the center of the lake. I knew where the carp were hiding, less that a yard from the edge of the lake. In the twilight, I saw no evidence that fish were feeding but the fleeing carp's wake showed me carp were near and feeding. About 5 minutes later I hooked my first carp of the day. I told my fishing buddy and got him to try. He hooked his first carp in 2 days; in almost total darkness except for the moon above. Shortly after he netted his carp, I had a 2nd carp thrashing in the dark on a #10 barbless. With the sun gone the temperature begin to dive.

You must know how carp behave before you can catch carp. until I witnessed the carp feeding, in mass at dusk in the fall, I would not have believed that carp could become active so quickly. their feeding slowed after 6:30pm. we left after 7:00pm
Posted by The Great Lakes of NYC at 7:36 PM