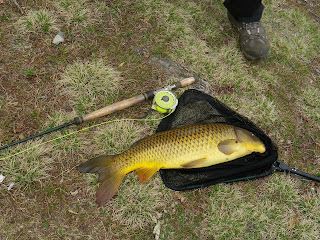 Finally caught a few carp using my Beulah Switch
fly rod. For the last few years, I've watched
carp clooping on the surface, just out of reach
of my longest cast using a 9' foot fly rod. Today
I brought my big stick! I put my deer hair fly
right in their faces. 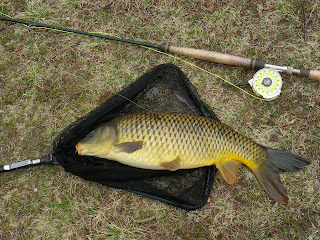 While fishing was slow due to low water temperature
The Beulah compensated for the water by putting
my fly where carp were eating, more than 60 feet
away. There are trees all around this lake so
backcasting is not an option. Spey casting is the only
way to go here. 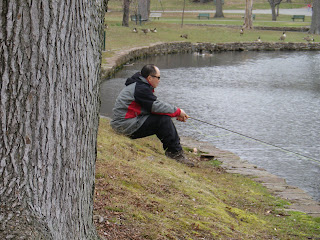 Dennis had to use some creative tactics to
reach feeding carp. He didn't have a long rod.
As the day wore on, carp appeared to stop
feeding. We discovered that the smaller fish
had begun to feed on the bottom of the lake at
the shallow end of the lake. But the wind had
started to blow harder which made it impossible
to see the fish feeding. 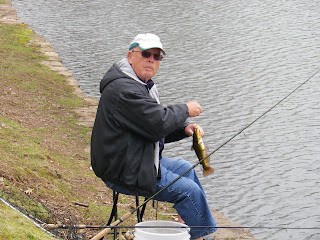 The Terminator, Tom fishes for carp daily and
has impressive stats ( over 500 carp a year).
Here he is releasing one of the catfish he caught
in addition to several carp he brought to hand. 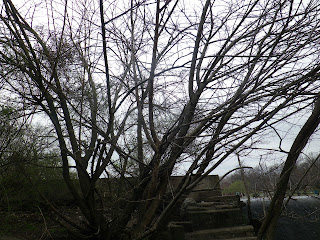 This is the Mulberry tree about a month before
the berries appear.

A switch rod is a combination of a standard
fly rod and the longer spey fly rod. It allows the
fly fisher to use standard casting technique or
Spey casting technique to catch fish.
Posted by The Great Lakes of NYC at 8:14 PM