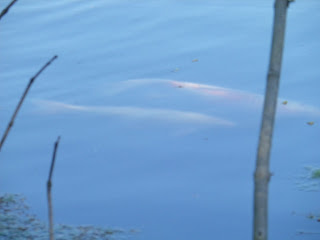 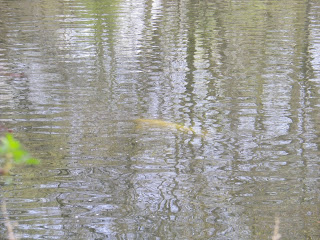 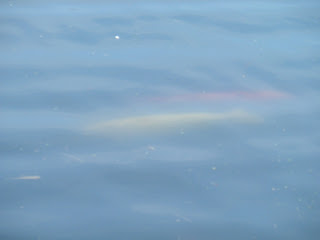 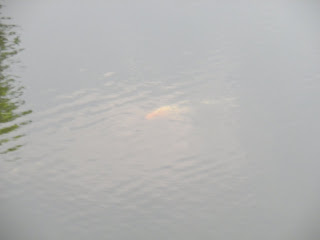 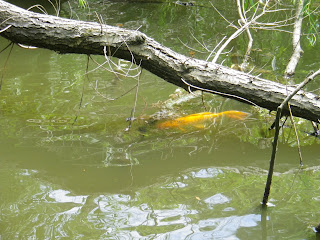 With the dog days of summer here, fish become less active in the lakes and ponds in New York City. It is best not to fish during this period because just like humans, fish become stressed from the heat. This is the time to watch some of the fish .

I was surprised to discover the number of koi that are in urban lakes. No one seems to know how they arrived. I suspect that they are the result of people moving and relocating their pets to the nearest lake. But no matter how or why, the result is that multi colored fish now live happily in urban ponds and lakes.

Carp have been a source of food for Asians for for many centuries. First in China, later in Japan, carp were also bred based on their coloring. In China this led to producing goldfish. In the rice fields of Japan this breeding of carp for their coloring produced "brocaded carp". The Japanese word Nishikigoi means brocaded carp. Koi can live for a long time, longer than humans. In Japan the oldest documented koi lived more than two hundred years!


Prospect Park lake has many koi, some more than a meter in length. Some almost snow white, some with different combinations of orange, black or red. Due to their unique coloring koi are extremely cautious. They can not hide in their surroundings like common carp and other fish. However they can be observed in the spring as water temperature warms. To watch koi and other fish wear polarized sunglasses, they allow the wearing to see through the light reflected by the lake's surface. There are common carp that weigh nearly fifty pounds in the lake too.