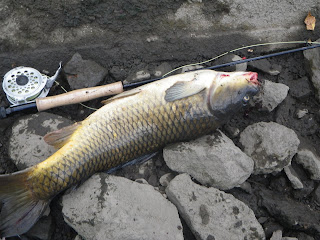 I always look forward to fishing the new moon cycle during the month of July. The new moon, two days before and two days after the new moon means big fish will be active. So every July I take my 8 or 9 wt fly rod, some really big flies and I head for the river. In this case the Passaic River in New Jersey. Today I arrived late the tide had already started to go out. Normally, I like to get to my spot about three hours before low tide. I thought I had taken everything in my fanny pack but I forgot my big, six inches plus, flies. My supply of flies did include some surface saltwater flies but no big sub surface streamers. Until today, I had never tried to catch a pike on a surface fly but that was all I had in my box. So I tied on a big black gurgler with dangling legs; hoping it would resemble a rodent swimming in the river. I began to work the river, making casts. Cast retrieve, cast vary retrieve, slow first and then faster. After about twenty or so casts, I had moved about forty feet down the muddy slippery shore when I stopped stripping in the fly. A big black gurgler was still on the water. Suddenly the water looked like a toilet after it has been flushed. The big fly was no longer on the surface but the fly line had tightened and I knew I had hooked a pike. He went deep and across the river. I made sure I had set the hook and then put the fish on the reel. Several jumps and a few more runs across the river and the tiring pike came into shore. According to my watch, there was about an hour until low tide. I took a few pictures, released the pike and walked down the river towards a spot where carp like to feed on surface things.

At first I did not see any carp clooping ( eating from the surface) but as I got closer I could see carp lips and open mouths sucking in floating leaves and things. I quickly changed my leader and made it carp friendly. I tied on something that was brown in color and floated. Made a looping cast and waited, nothing. I made a longer cast to where the carp weer feeding, again nothing.
Another cast and this time a take, a solid take. The carp plowed under the water and across the river, full speed ahead! I always move down the river bank with the carp (I have no desire to see my backing) for about 50 feet or so. This guy was very very strong. Lots of strong head shakes. Deep dives to the river bottom, runs and more runs down the Passaic; a powerful fish.
For a moment I wondered if the fish was foul hooked. He fought almost like a salmon. Twenty minutes of man against beast, I know I was tiring but was this carp? I was using an 8 wt rod that seem to underwhelm this fish. Eventually, I got him in to shore, where I took a pre landing photo. I whipped out my new Boca grip, put it into the mouth of the gasping carp, and placed him on the river bank.

carp on the rocks 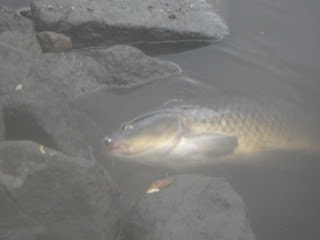 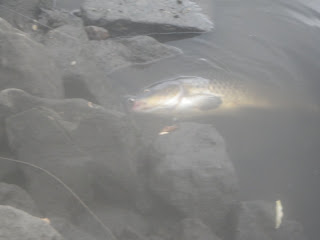 carp on a fly 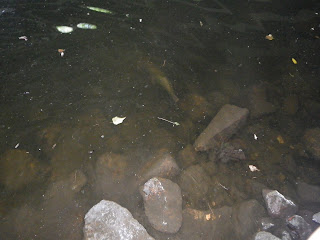 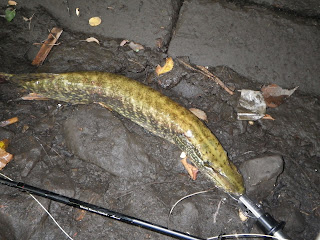 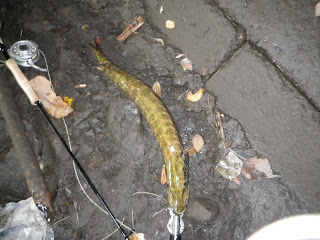 another view of a Northern pike 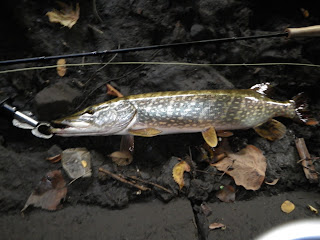 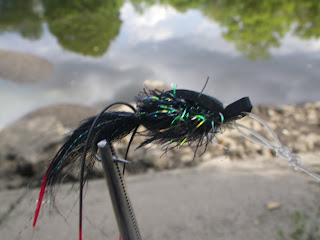