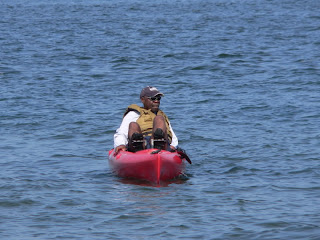 It is a little after 10 o'clock in the evening and I'm still trying to replace the fluids I lost this afternoon. Andy, a longtime friend, invited me to his Canoe club for a day on the water using a borrowed Hobie cat. I took the Hobie cat For a test run at about 10 o'clock this morning. Just an easy run up the Paerdegat basin to the bridge for the Belt Parkway and back. I made some minor adjustments to the pedals and waited for this first group of paddlers to leave. I found out later that the first group scheduled to leave was going to kayak about twenty miles. As a first timer that was too much for me to do. The second group intended to kayak about 5 miles so I signed up for that group.

All week temperatures have been in the 90° range, so it was very hot. I loaded my boat with drinks, mostly water, and my group headed for the largest island in Jamaica Bay, the Canarsie col. There were single and double kayaks in my group; some beginners like myself and others with more experience. I had two problems the rudder control was on my left side and the ninety plus degree heat. But I was able to keep up with my group. If it had not been for the occasional breeze of cool air the trip would've been very difficult. As we neared the Canarsie pier, on the return leg, I could feel that I was very very tired. the heat was taking all of my energy away. However, the Hobie cat allowed me to keep pace with the leader of the group. The Hobie cat allows the user to pedal rather than paddle.