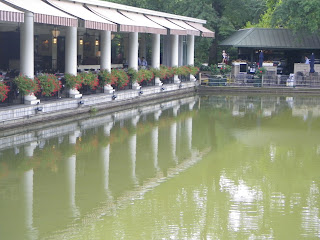 The plan was to meet early, at 6:30 AM, to fish for carp in one of the lakes in Central Park
I wanted to fish near the restaurant at 72nd street.  My friends wanted to fish on the west
side of the lake.  The previous evening we had been SKUNKED by a band of koi on
Staten Island.  There was a score to settle. 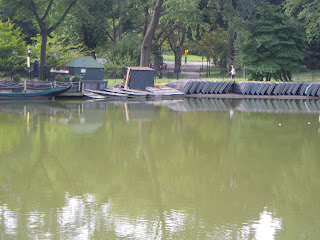 The reason we had to arrive so early is that this lake has a boat rental concession that opens at 10:00 AM.
The best carp fishing is before the concession opens or after 7:00PM when the rental closes. 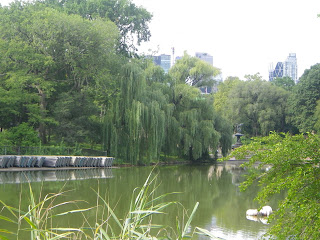 We fished from a prehistoric rock left by the glacier's retreat as it receded north.
Not ideal for fishing but carp fishing requires constant adjustments. 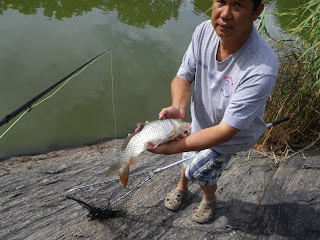 Here is my first carp of the morning.  A little guy. 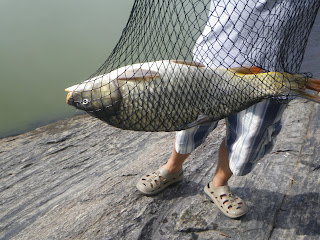 Here my friend Steve holds the net with my next carp.  We stayed until the concession
opened.  Once the rowers started to bang their oars on the boats carp feeding stopped.
Two of my group of four had to meet their families so they went home.  Only Dennis and I were left.
We decided to fish at another of the fisheries in the park.  "The Pool"  holds "Club Size Bass".
My definition for  Bass that are about a year old ( twelve inches) is they are club size.
Dennis and myself  used streamer flies.  I used single hand rod spey casting to
reach bass on the far side of the pool.   We hooked several bass before the bass turned off. 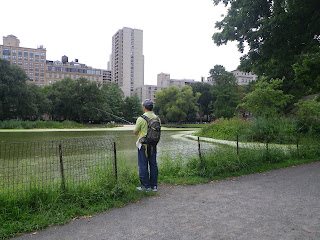 We walked to The Meer at the north end of Central Park.  Surprise.  About 3 feet of water
was missing from the lake.  We guess the water had been drawn down for some repair work
that needed to be done. 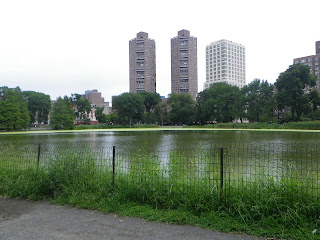 We packed up and headed for New Jersey to fish for carp there.  By the time we arrived
in Garfield, New Jersey,  Steve had driven to Garfield also.  So after eight hours we were
back together fishing for carp again.  By the time we decided to quit, it was dark.  By the time
I reached my home more than fifteen hours had passed since we met at 6:30AM
. 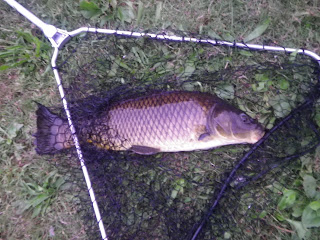 This was my longest day of fishing; fifteen hours of thinking about nothing else but how to
catch carp.