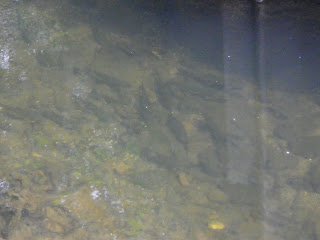 Can you count the trout in this picture?  This photo was taken at a river that passes
through Nutley, New Jersey. 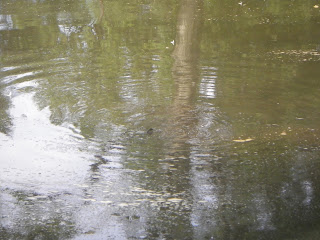 I like to fish this part of the river for carp.  The carp here are so difficult to catch that
even fishing with corn does not make it any easier to catch them.  I spent three hours
trying to catch some of the tailing carp.  I tried everything.  Nothing worked. 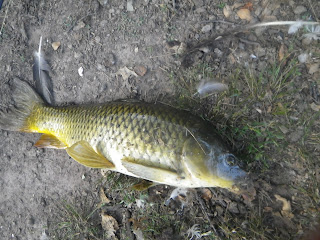 As the day was ending, I moved to a different part of the river.  I noticed that the
carp would move away when they sensed my presence but would slowly and I mean
very slowly return to continue to feed.   Carp seem to ignore things they see daily.
By that I mean, if there is a tree or a wall  near them that is something you can stand
near, in front of or behind and carp will be unable to "see" you; if you stand very still.

I stood in front of a tree on the shore and waited.  I waited some more and saw the
feeding pod of carp slowly return to where they were feeding initially.  It was as if
they had GPS.   Suddenly my fly line tightened and the reel released line to a fish
that was accelerating across the river.  I forgot to mention  that I was using a
2 weight fly rod!  It took a while before I was able to get control.  Half my backing
saw daylight.  Bit by bit I was able to put line back on my reel and eventually
land the carp.