Bass on a zug bug 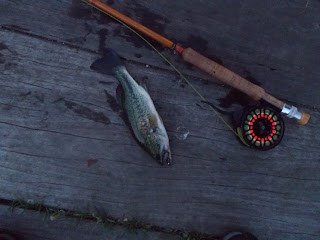 This is a fun time.  The spawn is almost finished and the water is warm.  Panfish, Bass and Carp are
feeding.  I was able to fish near the Boat House in Prospect Park.  The sun was setting and I hoped
to catch a few Blue Gills.  I started with a few nymphs, size # 14.  Next some streamers size # 12.
The lake surface was motionless.

I looked into my fly box for another fly.  A fly that has produced for me before caught my eye,
the Zug Bug.  I selected a bead head version #10.  I knew that the bead head would reach the
bottom of the lake after six seconds and fish would react to it on the rise.  But nothing happened
until I fished under the deck of the boat launch.  I let the fly sink to the bottom and then slowly
troll the fly behind me as I walk the deck.  This gets reactions from fish on or near the bottom.

This tactic works on blue gill many times.  I keep the rod tip pointed down and do not set the hook
until the fish has hooked itself.  As I walked and trolled the line behind me; I felt a bump.  The fish ran
under the deck and refused to come out, for awhile.  Slowly I raised my rod tip and brought the fish
to the surface.   It was no blue gill this time.  It was a bass.

At this time of the year, it is fun to fish a Dahlberg diver for bass.  Bass like it because it moves up
and down in the water column.  A few years ago I caught six bass as I fished the south shore of
the lake.
Posted by The Great Lakes of NYC at 10:12 AM