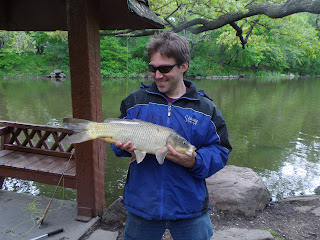 I got an e mail from Jay, saying he had some time to fish for carp on Monday morning.  It was about 48F
with a wind chill factor; to make it worse.  I put on a fleece jacket and my Exodus back pack
then headed for the subway. 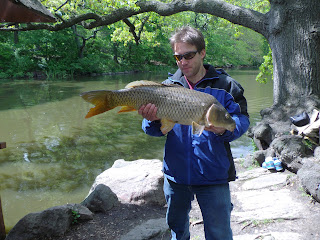 When I got there Jay had his wind breaker on with the hood up.  It was overcast and occasionally
the sun would peak out.  I set up and got ready to fish.  There was no real activity that we could see in the water. 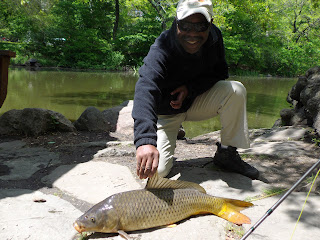 It took about two hours before we saw any carp movement.  Jay finally had a fish on.  It was a Koi. 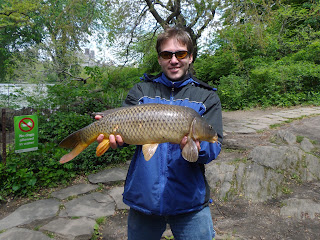 Today we will not count his bluegill or the bull head catfish in the tally.  But there were many. 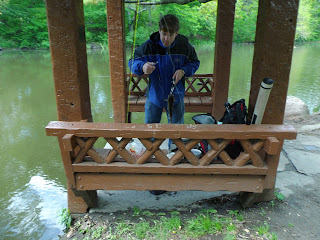 As the middle of the day arrived, things started to pick up.  I caught a fourteen pounder that fought
as if he were a striped bass.  I saw my backing, fought his brutal head shakes and countered his attempts to wrap my line around submerged obstacles.  Several times he dove to the bottom of the lake and just hunkered down. 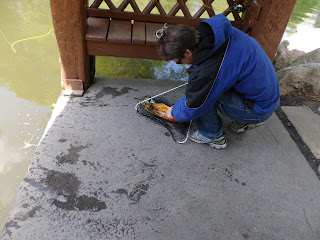 After catching a 17 pound carp, Jay went for the big one of carp fly fishing the trifecta
"TRIFECTA" ( Common Carp, Mirror Carp and a Koi,  all in one day)  Unfortunately, I lost the Mirror
as it got out of the net before I could  pull it in.  Sorry. 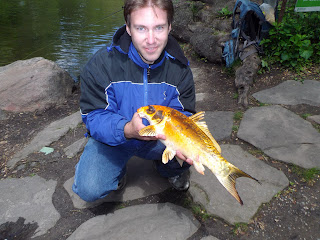