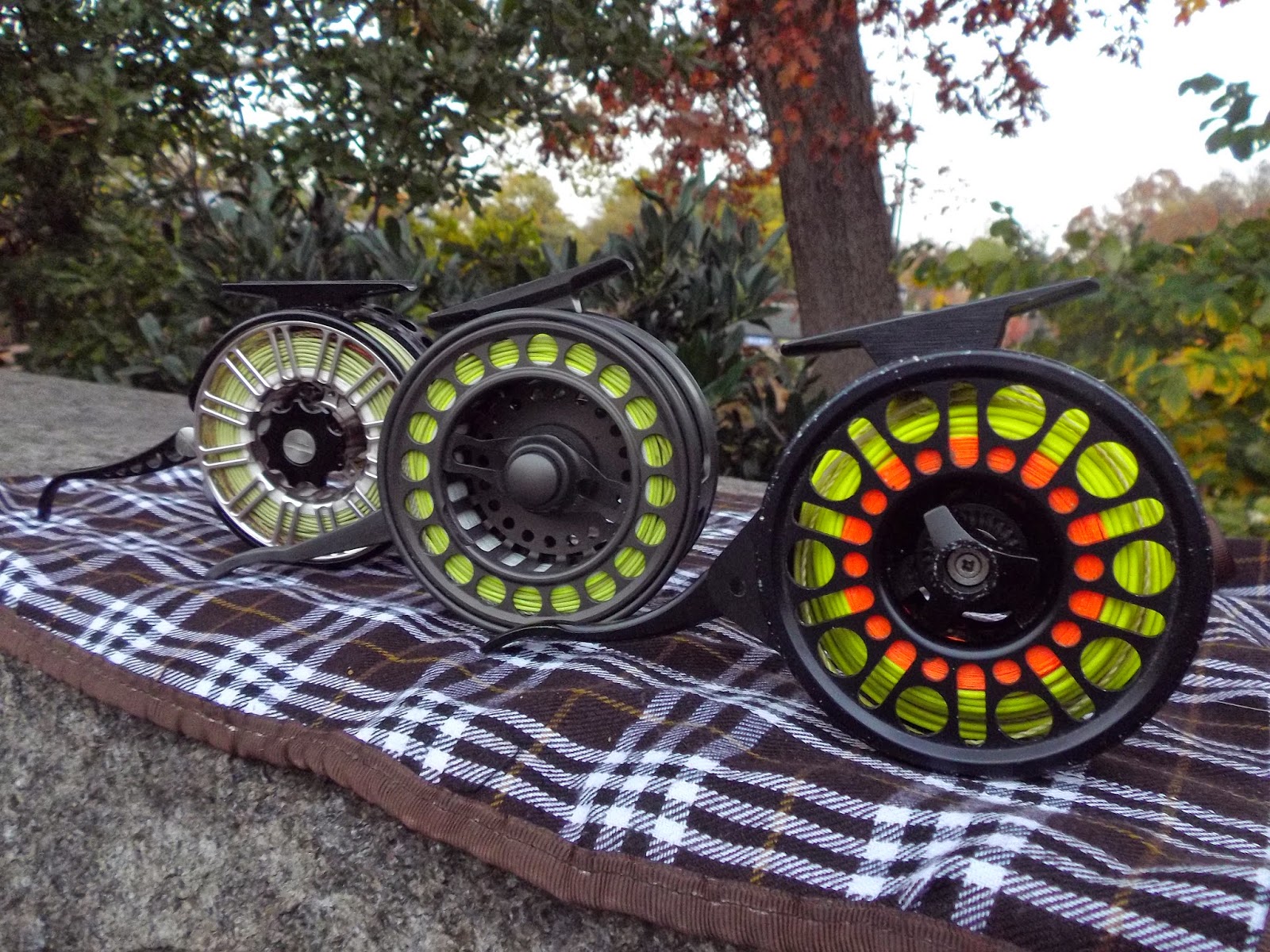 
I acquired two new semi automatic fly reels this past winter; the not so new Ghost from Spain and
the Ozone from J M C, a french company.  The Ghost has been around for about six years.  It is
very much like the reels based on the Vivarelli design.

I decided to buy it this year because it is a large arbor type semi automatic fly reel.
This reel weight is less than 175 grams and takes WF5 line with 100m backing.   I will return
Ghost for repair or replacement because I have not been able to adjust the drag on this reel; based
on the instructions supplied by the manufacturer. 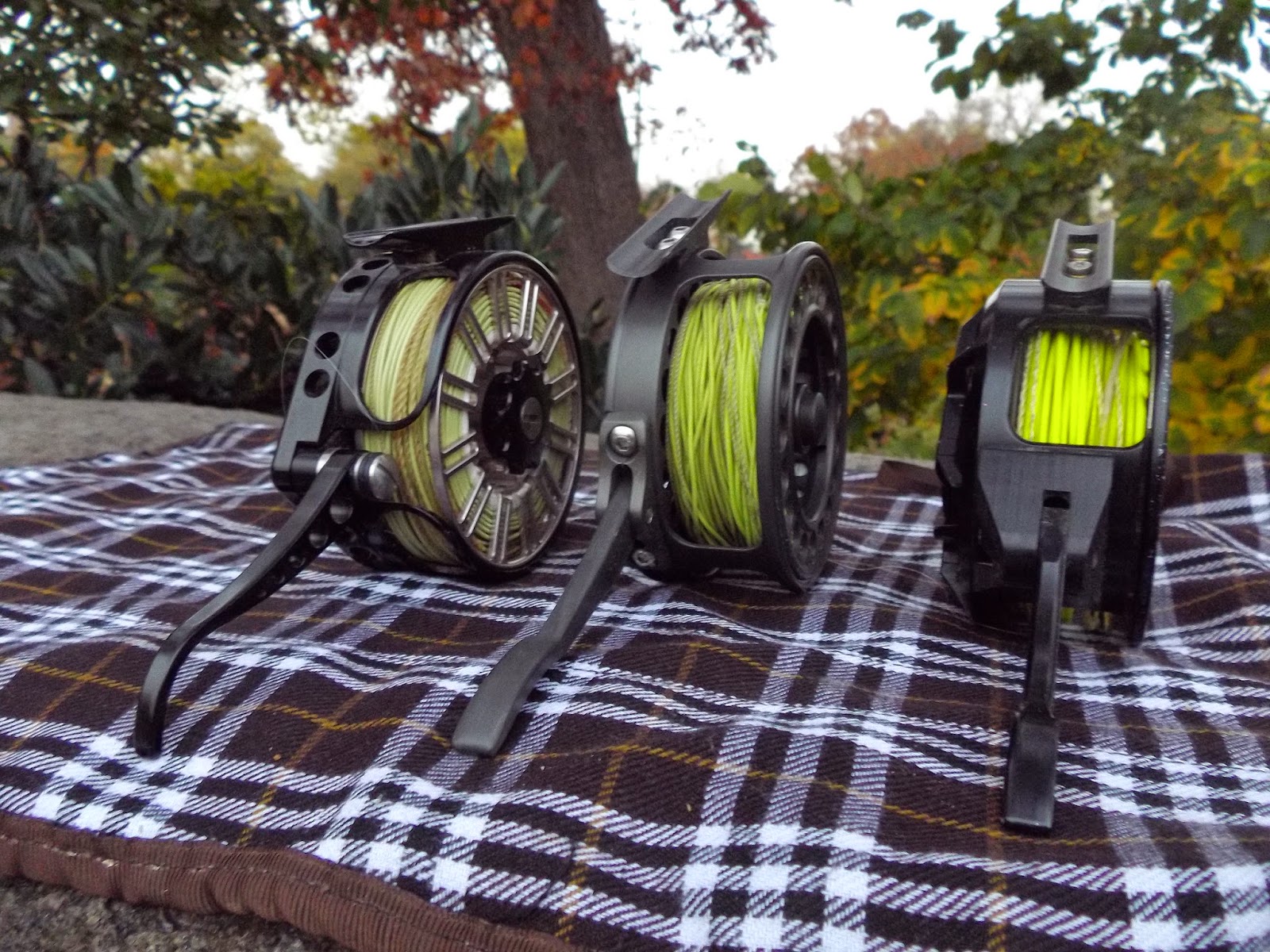 
When I saw the profile of the JMC Ozone, I knew I wanted this reel.  It is a skeletonized.
There were production problems and it took more than six months before the reel was available
to the public.  I was surprised that the reel came with no instructions.  The company's feeling was
that semi automatic reels are common in Europe and need no instruction about the reels use.  What
the company failed to realize is that the French use different threads on their screws.  In America
we turn screws clockwise to tighten and counter clockwise to loosen screws.  So without this
knowledge you can not adjust the drag on the Ozone.  The spool can not be removed either.

However to the Company's credit, JMC called me from France and gave me instructions by phone.
Once I had this information I was able to set up and fish the reel.  The reel's drag can be adjusted in
tiny increments because of the new design.  Adjustments can be made while fishing.  The same way the ATP37, Bold and Fulgor can be set.  I really enjoyed fishing the Ozone.  I caught two carp that were more than 73mm in length this past season using the Ozone.  -  Material: Aluminum • Finish: Black Anodized and champagne • Brake: Micrometer Teflon • Spool: Large arbor , weighs 130 grams ,WF 6 line.

The third reel pictured is the Peux Fulgor from Switzerland which I fished most of  2013.  The Fulgor takes WF7, weighs- 148grams. 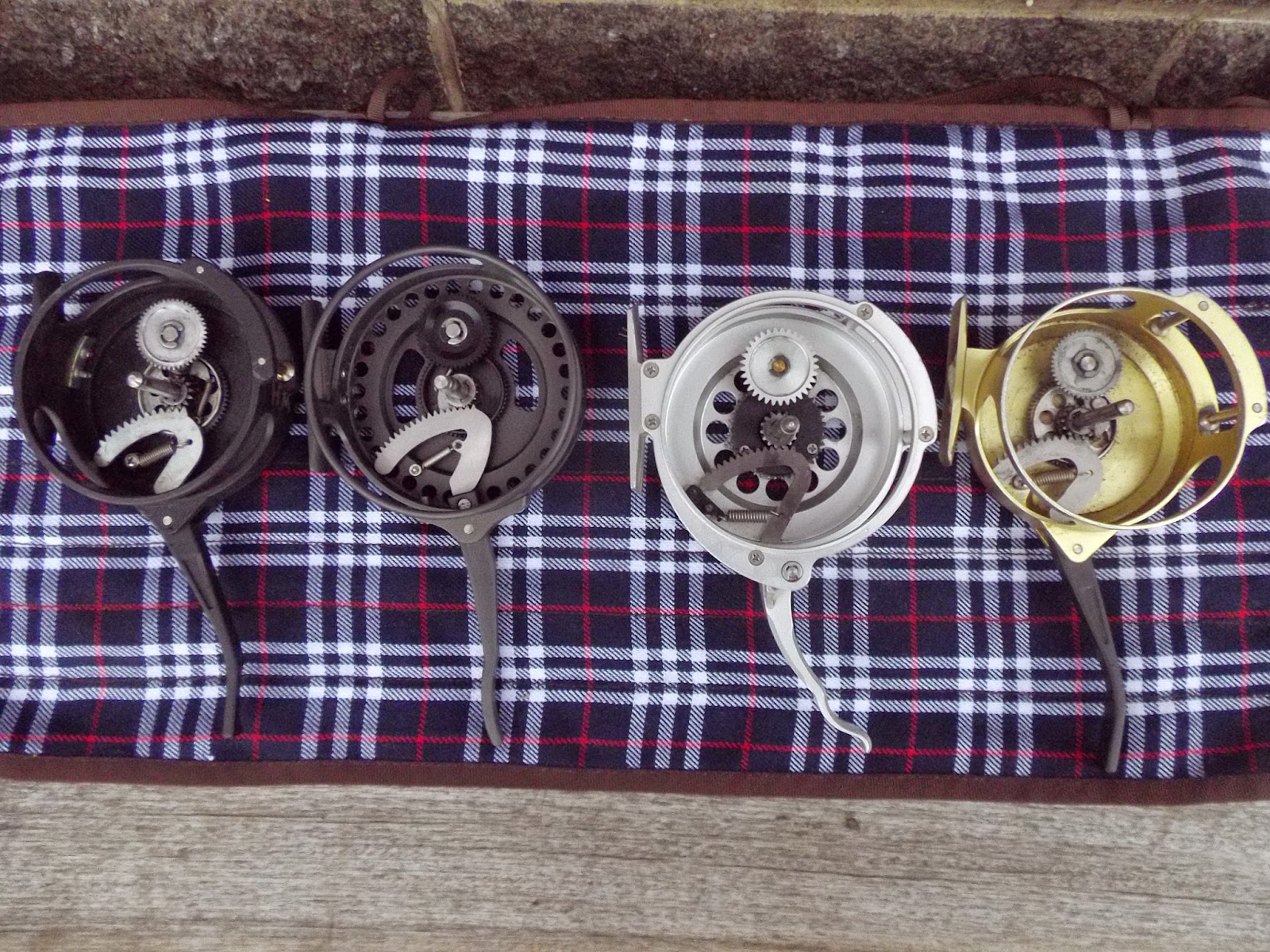 
Here are the Franco Vivarelli (carbon), Ghost, ATP 37 and the Vivarelli Goldstar.
The inside view with the spools  removed shows how similar the design of these reels are.  With the
exception of Ghost, all reels can hold WF7 line with no problem.  I have used WF8 line on the ATP 37
and the Vivarelli and still had adequate backing for big carp, stripe bass and pike.  ATP 37: weighs 186 grams   Goldstar WF 8, weighs 162 grams.  Vivarelli carbon:  WF 7, weighs 150 grams. 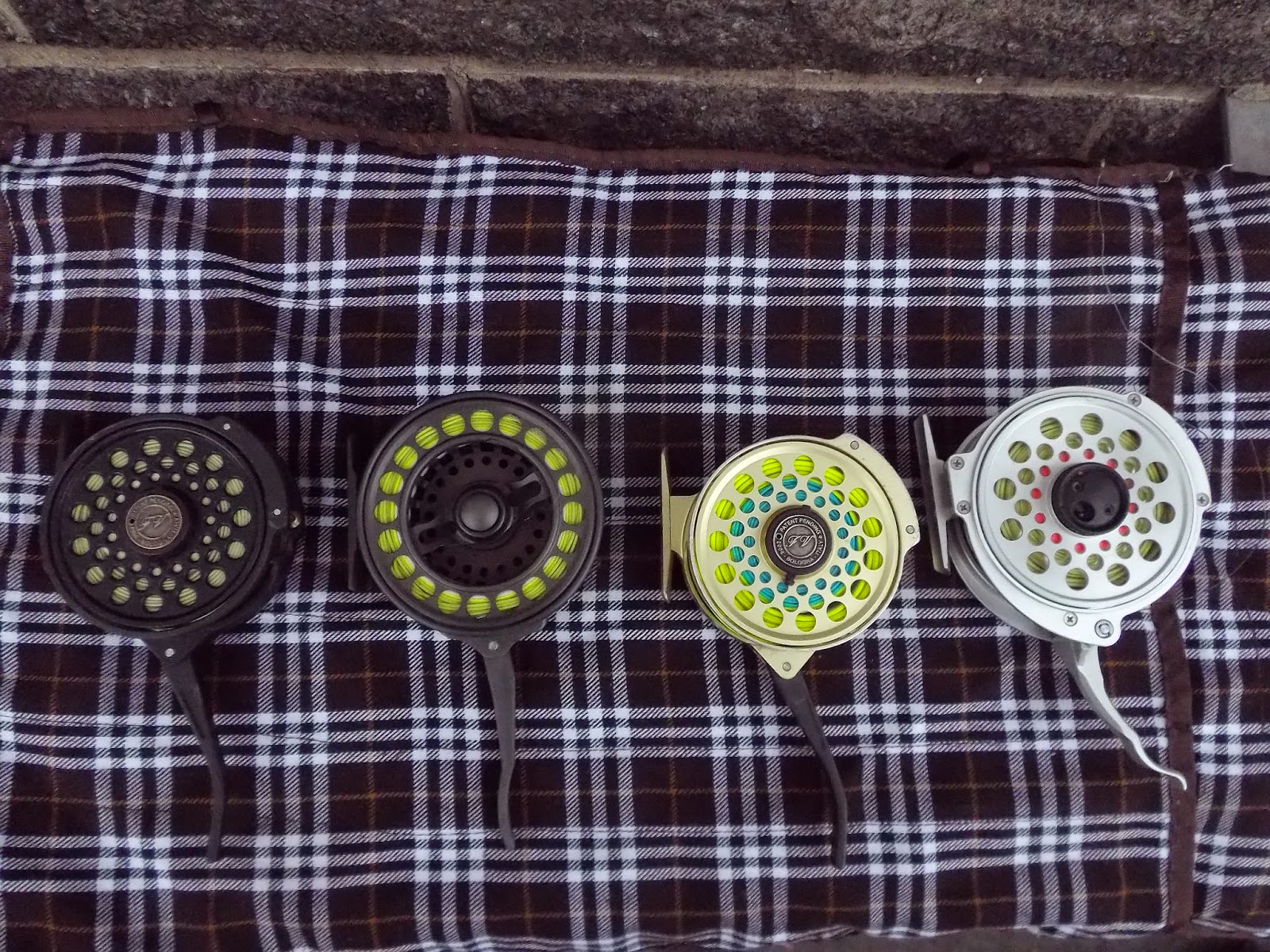 
A view with the spools in place.  Only the ATP 37 allows for the drag to be adjusted while
you are fishing.  The Vivarellis and Ghost can only be adjusted before fishing. 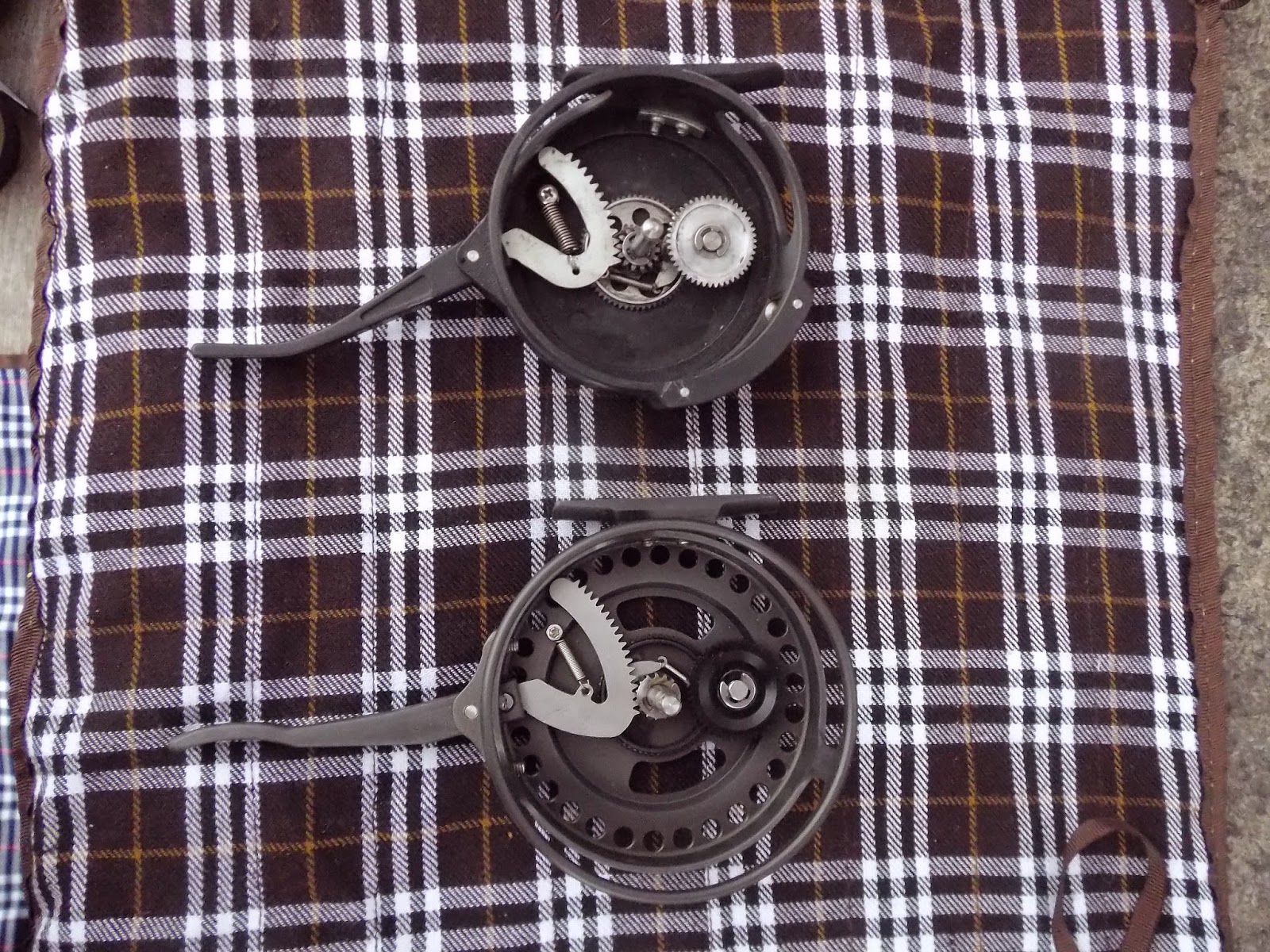 Inside view of the Franco Vivarelli (carbon) and Ghost.  They look almost identical on
the inside. 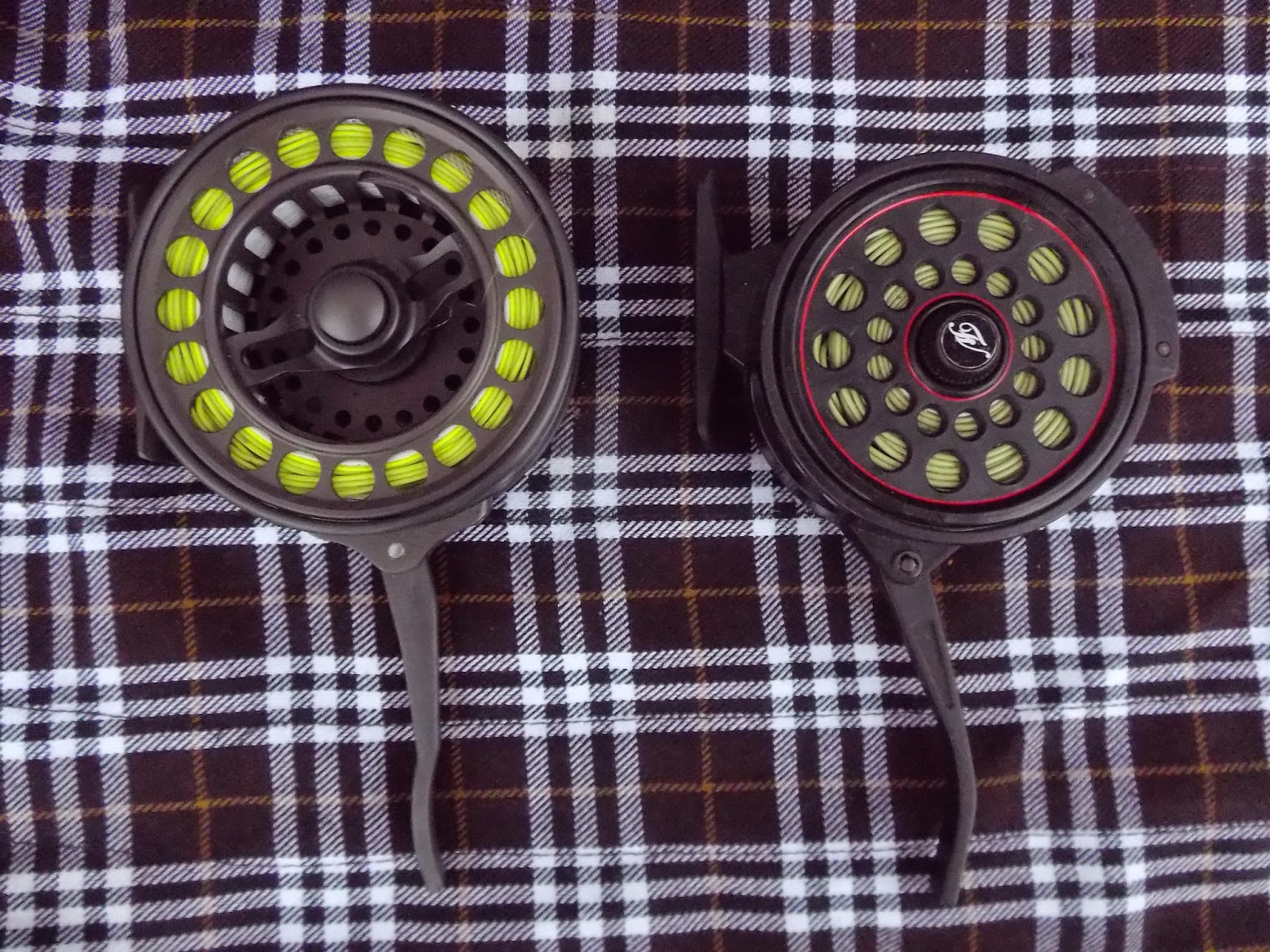 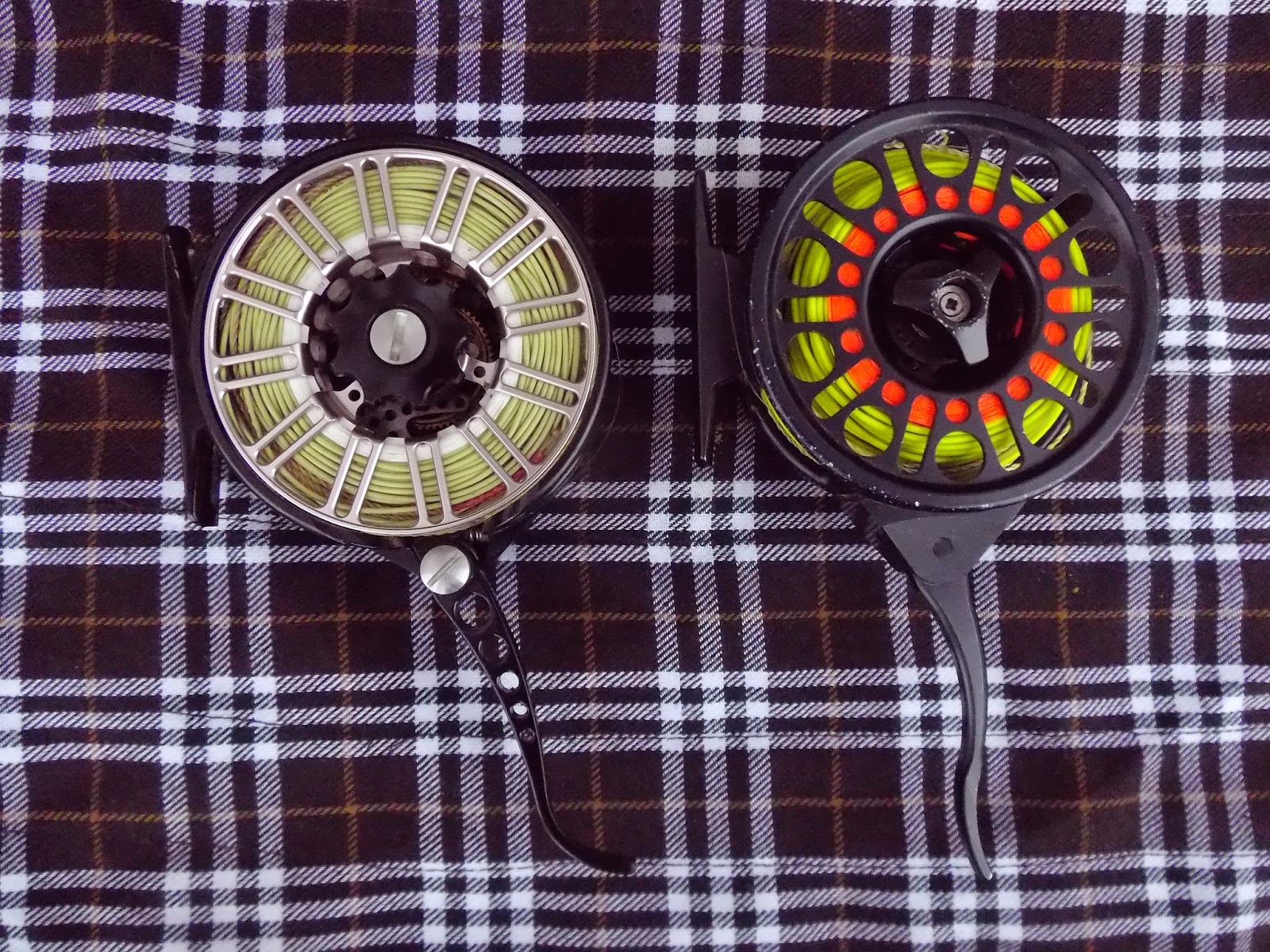 
First time side by side comparison of  JMC Ozone and the Peux Fulgor (Swiss made).  Both reels
can have their drag adjusted by turning the knob in the center of the spool.  Both reels are listed as
mid size arbor. Due to their unique design, neither reel makes a sound while a fish pulls line from the
spool! 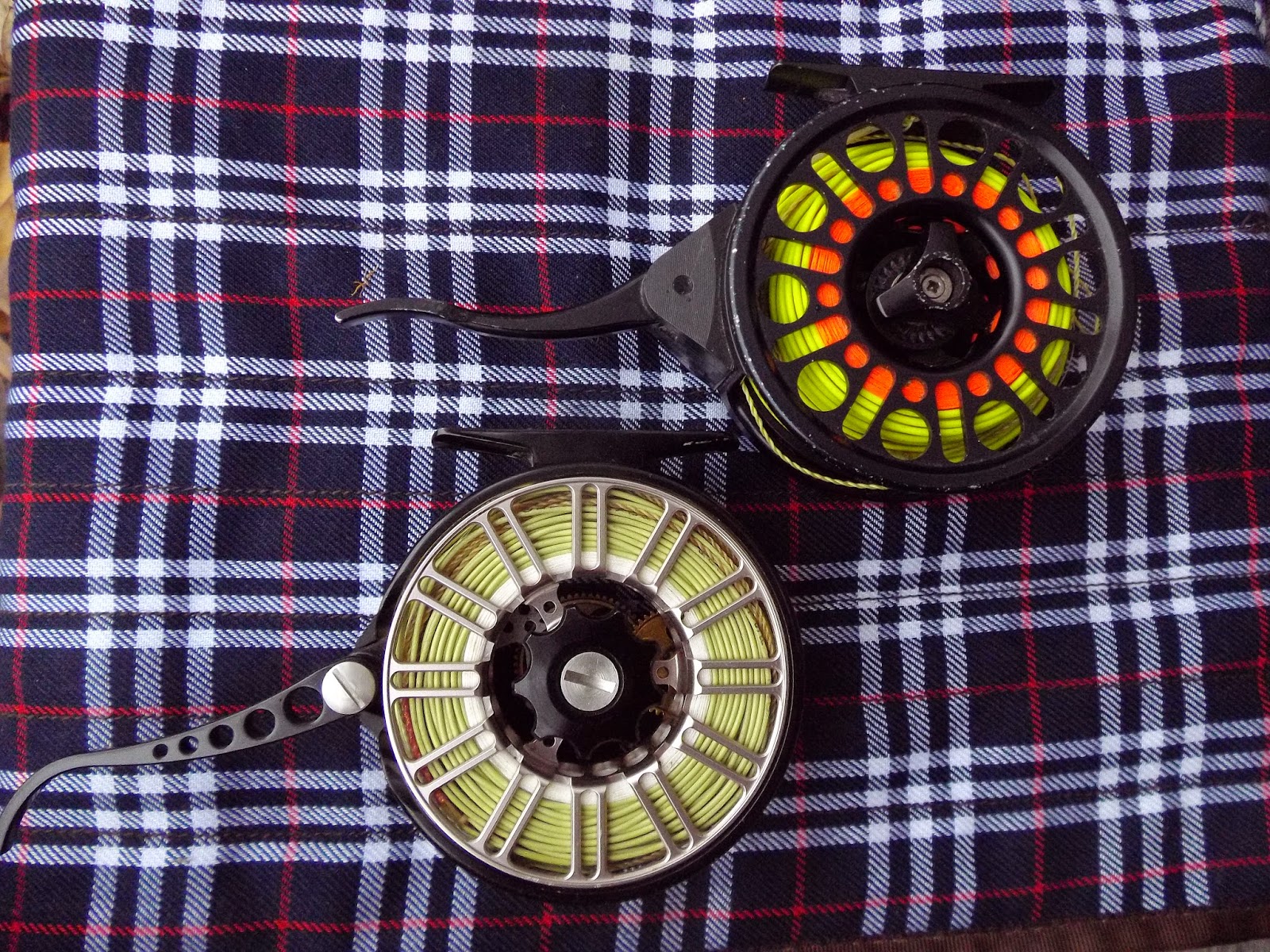 These are the only semi automatic fly reels that operate without making a sound as a fish runs.
Peux uses this as a selling point but Ozone does not. 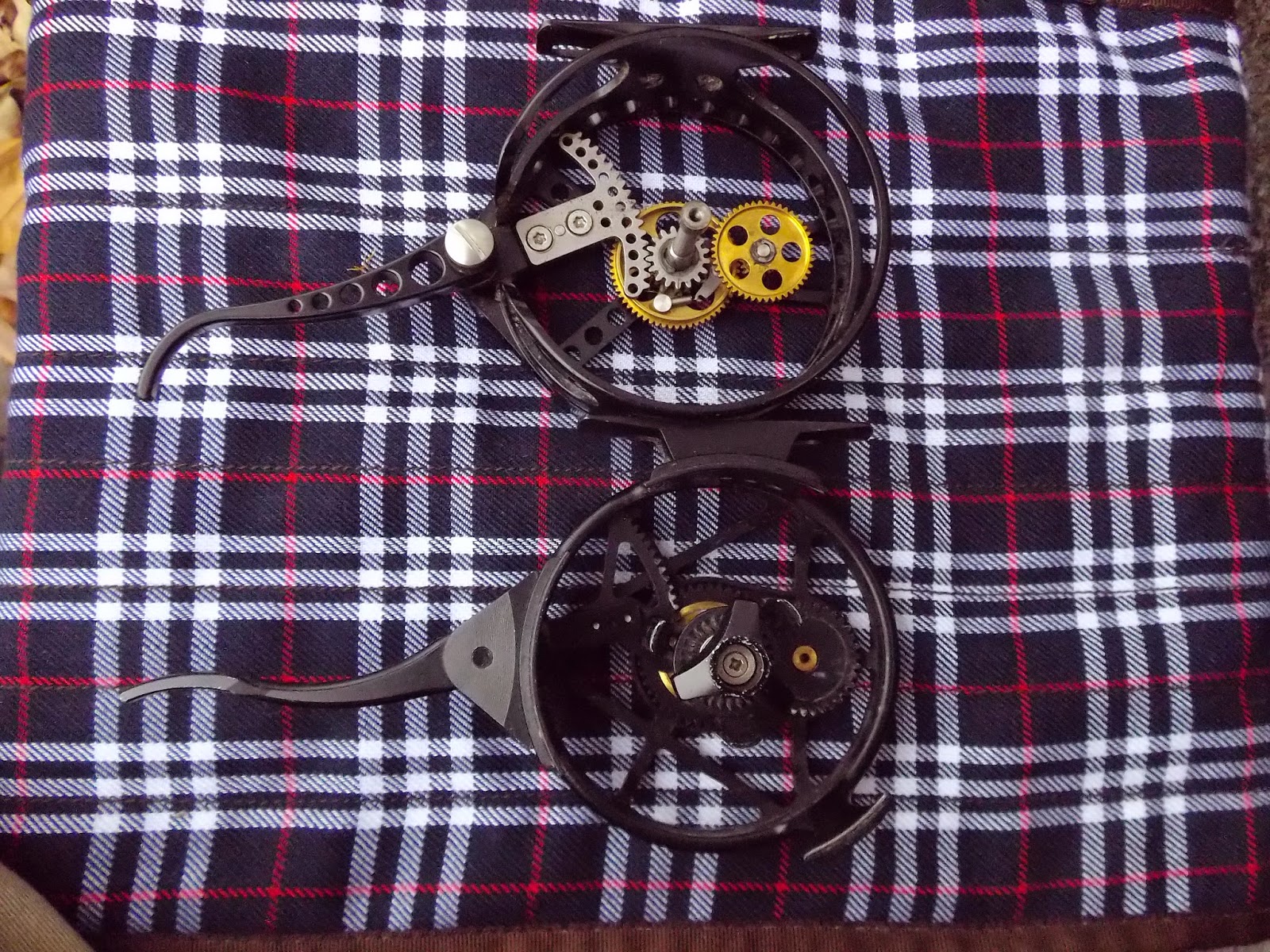 
Without the spools , you can see what makes these two reels different from semi automatics
reels based on the traditional Franco Vivarelli design. 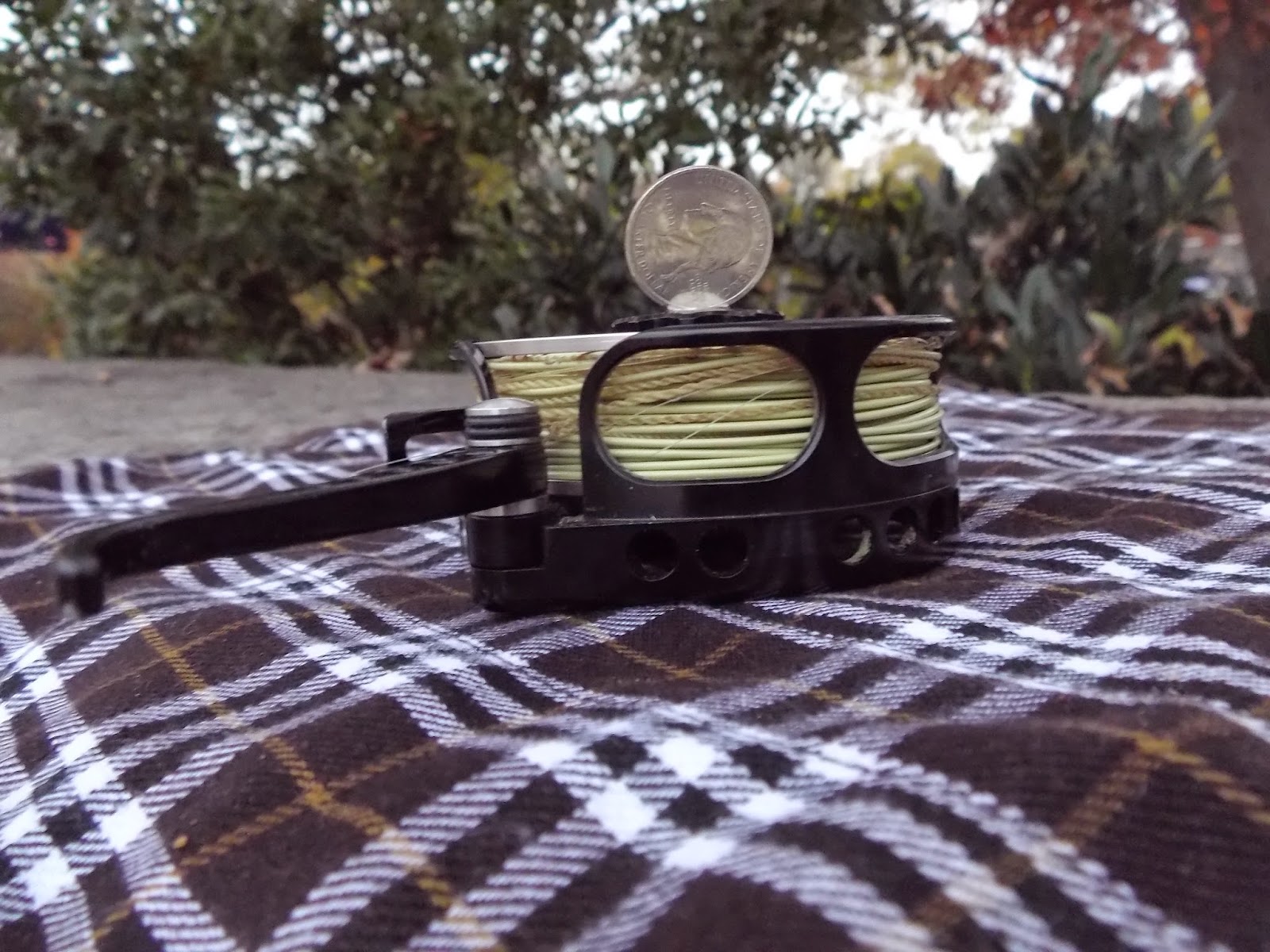 side view of JMC Ozone


You will need a US quarter of a dollar coin to tighten and loosen the screw that holds the spool
on the JMC Ozone. 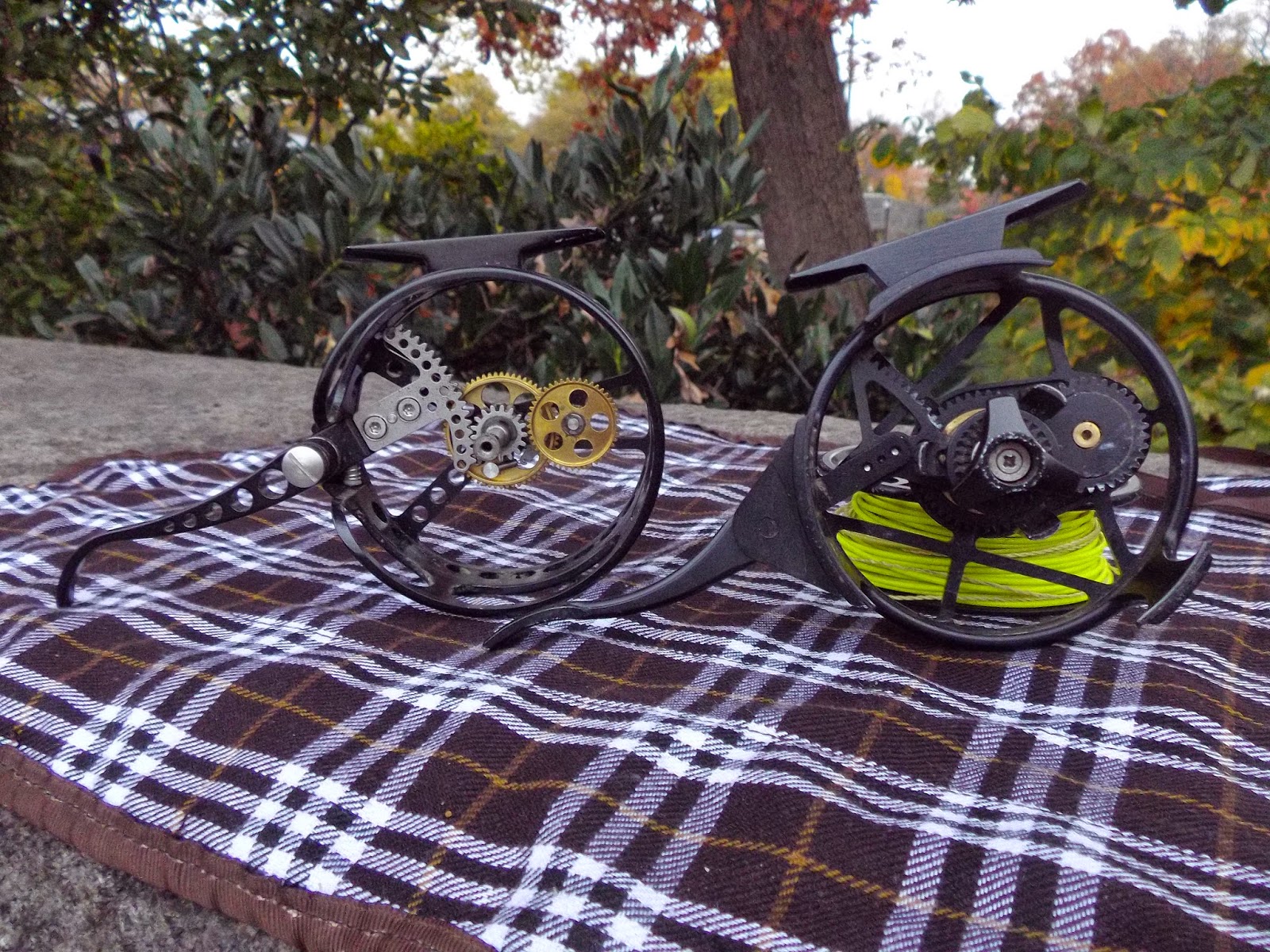 Ozone and Fulgor  side by side

A look from the rear of the JMC Ozone and the Peux Fulgor. 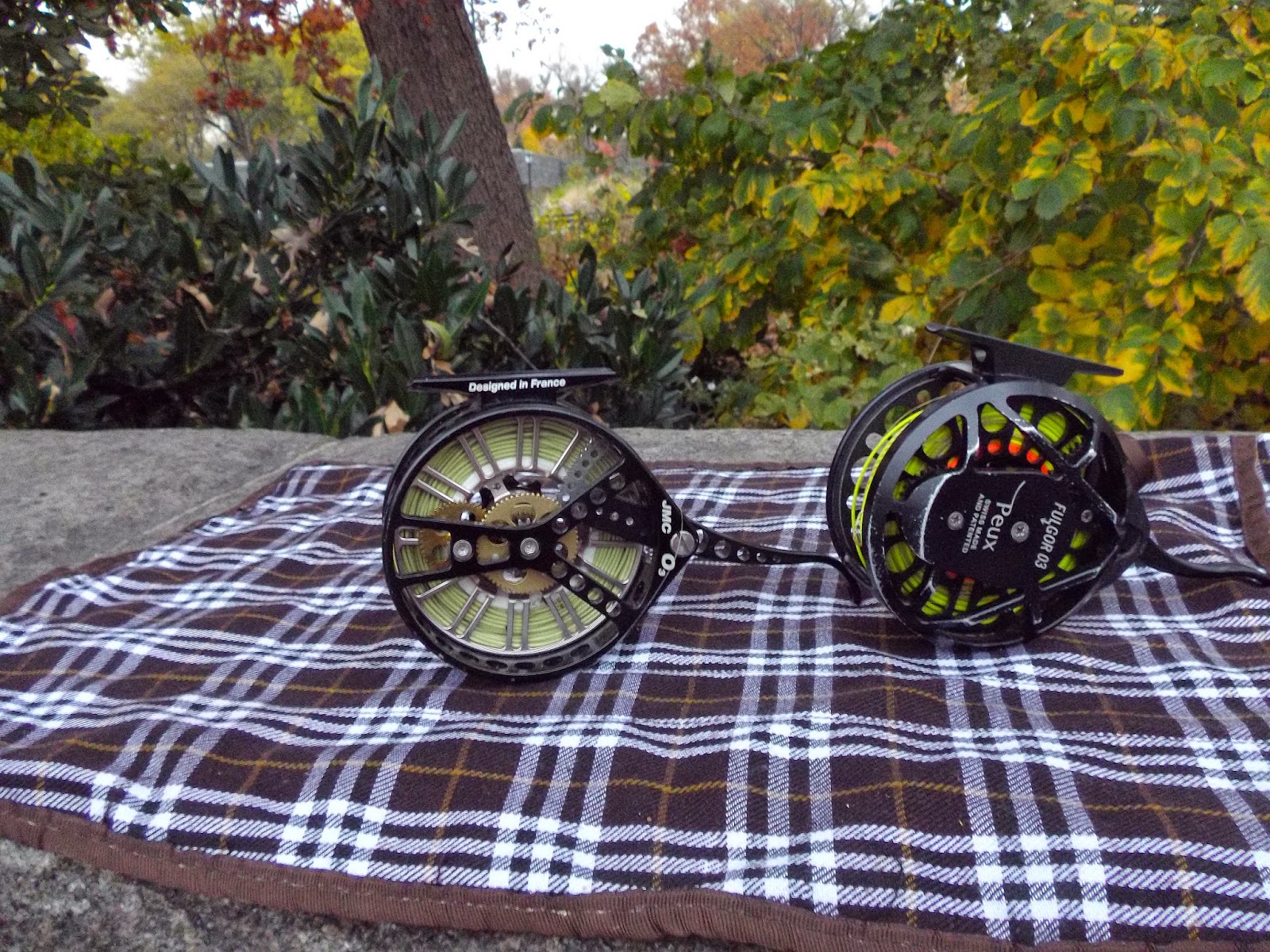 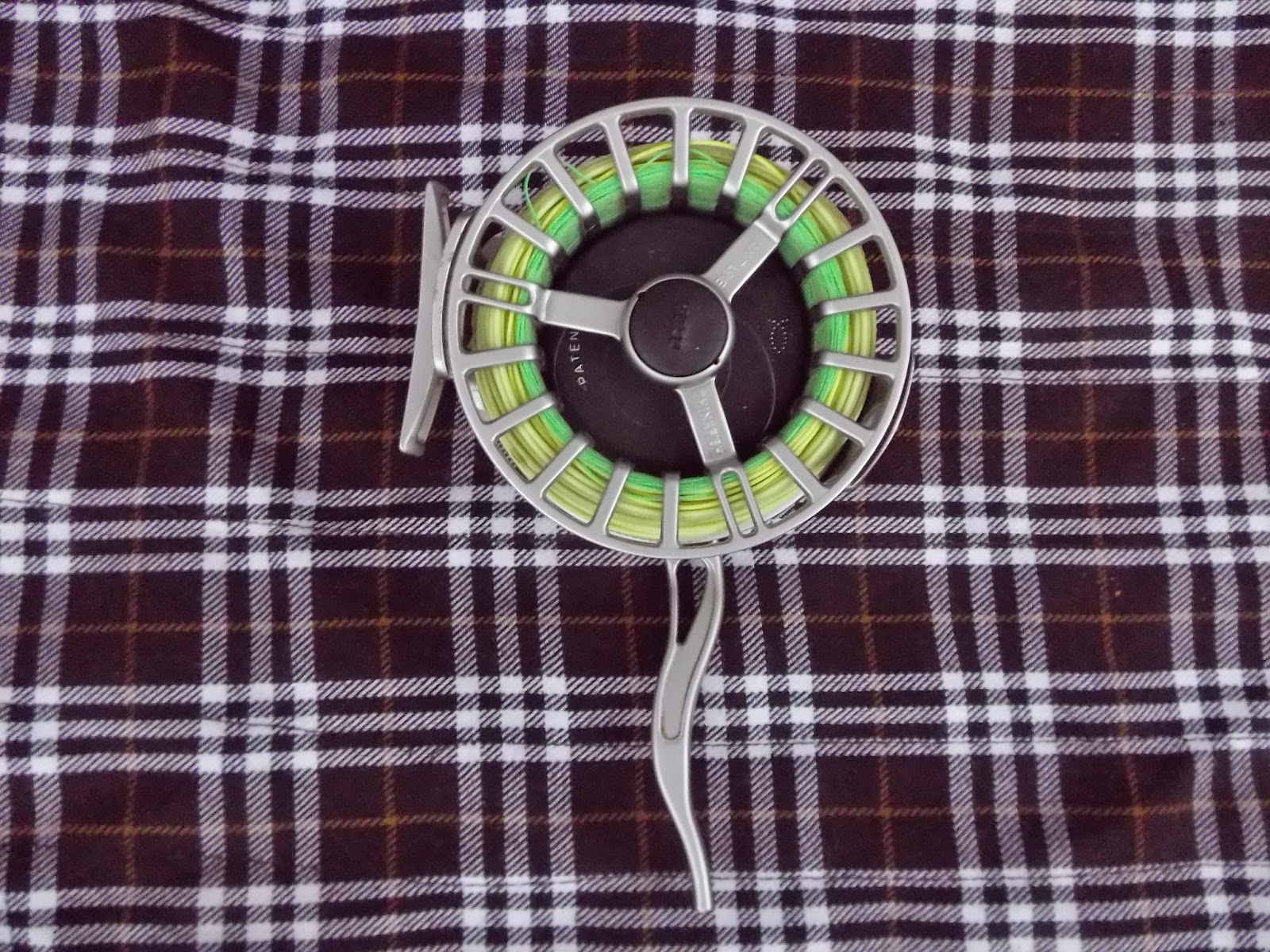 
The Bold from Spain made by Thinkfish.  Probably the fastest retrieval rate of all semi automatic
fly reels.  One pull of the lever causes this large arbor spool to turn five and one half times.   Be
careful  to check for over spin after you have landed a big fish. 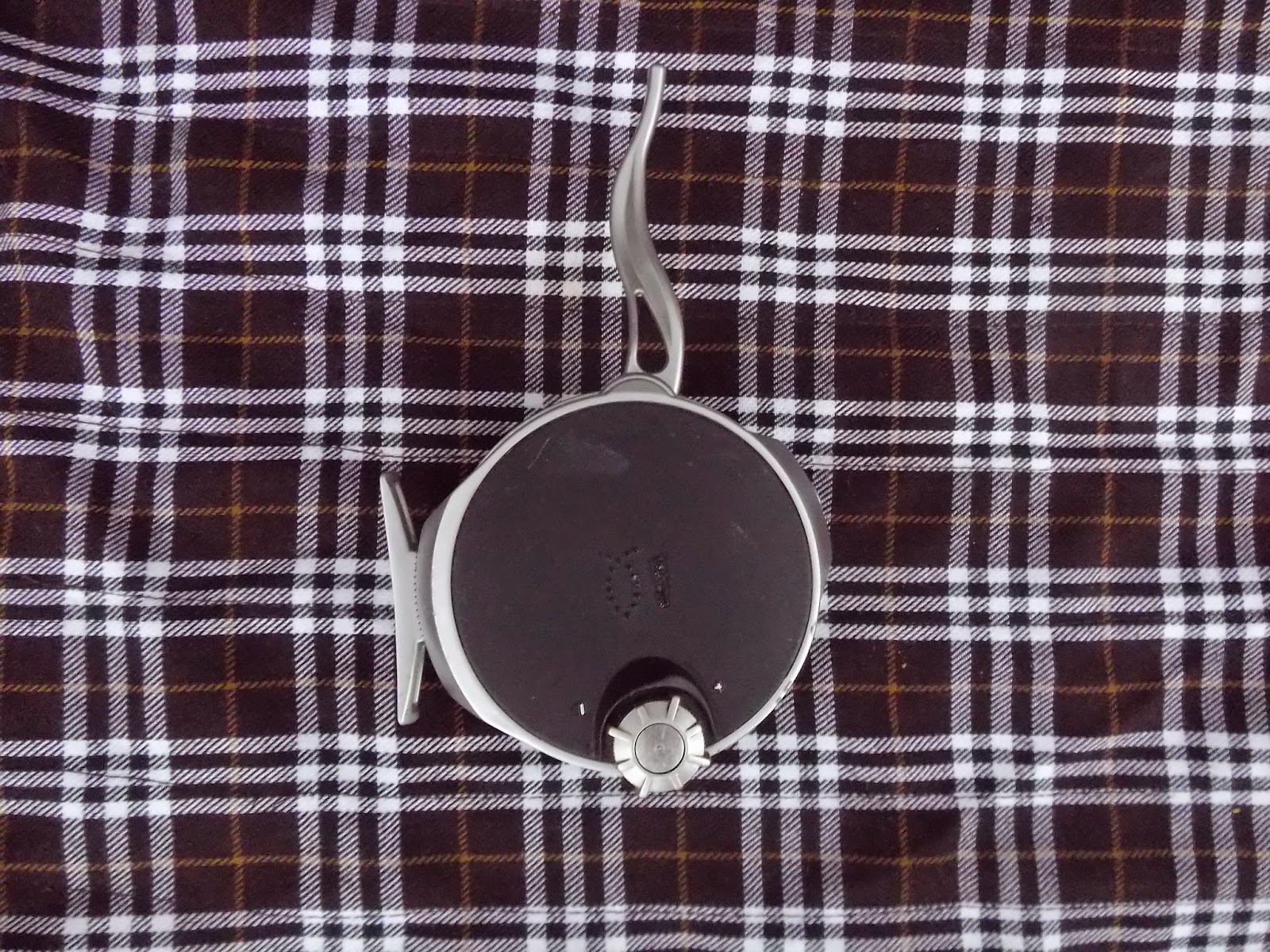 The drag adjustment on the Thinkfish Bold.  WF7, weighs 179 grams 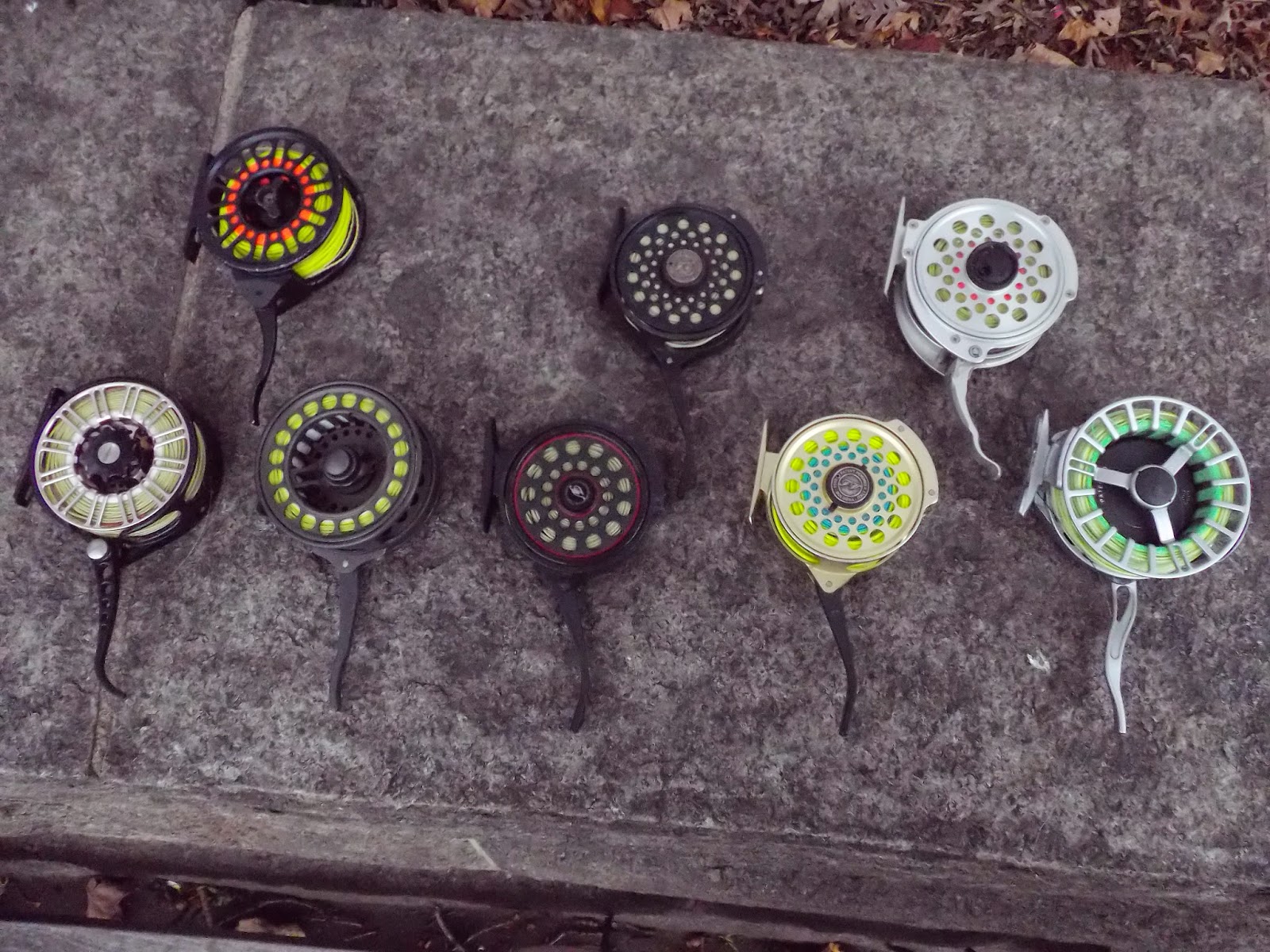 
These are the  fly reels I've fished with for the past ten seasons.  I fish rivers, lakes and ponds
and have caught warm and cold water fish with these reels.  They are high end items made for
demanding fly fishers. World Championships have been won while fishing with semi automatic fly
reels.  Semi Automatic Fly Reels are not made for everyone but can be fished by anyone.

One of the objections I've heard is that the skeleton design of Ozone and Fulgor make these reels highly
susceptible to girt and sand.  After fishing both reels for all but a week or two, I have not had any
problem with the reels due to sand or dirt getting into the open areas of either reel.  On a number of occasions foreign debris has gotten into the gearing on the Vivarelli type reels. A simple dip of the reel
into water allowed me to continue fishing without further delay.

Peux, in an effort to appeal to a broader audience, makes the Fulgor with a knob; just like traditional
fly reels.  But to me this defeats the efficiency of the semi automatic Fulgor which pulls in more than
two meters of line each time the lever is pulled.  The lever on a semi automatic fly reel does not prevent
the fly fisher from hand stripping in a fish.  I hand strip panfish frequently but big fish I put on the reel.
It is your option.

The design of the JMC Ozone and the Peux Fulgor has less parts to break.  I've had to send Vivarellis
to be repaired (all under warranty) because one of the small springs needed to be replaced.
However, all semi automatic fly reels are measured by how they measure against the Goldstar made
by Franco Vivarelli.