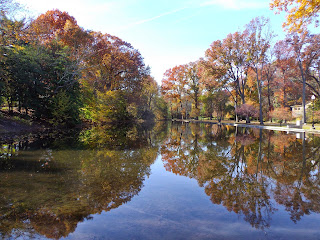 The park that Third River flows through has some of the most difficult carp to catch of any place
I fish.  Even the bait fisherman  have an equally difficult time catching carp.  The river is stocked with trout in the spring and the river has a population of bass and bluegills. 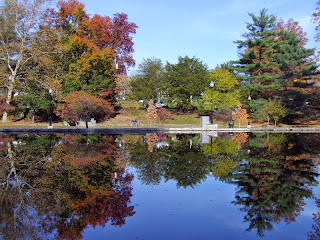 The reason I fish Memorial park is to test myself against the wary carp in this part of The Third River.
Today was no different.  Carp were scarce but a few were feeding in the shallows.   However
the carp in the shallows were very young no more than 30mm in length.  It was only later in the
day that I was able to detect where the larger fish were holding. 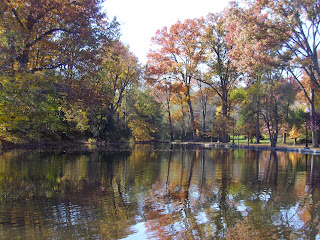 On the east side of the river, about mid afternoon I saw carp swirling.  I put a few dog biscuits on the
river surface, after about 30 minutes carp began to feed on the dry dog biscuits.   I tried several deer
hair flies and had no takes.  They continued to eat until 3:00pm.  It was almost like they were eating
lunch.  After lunch hour was finished they stopped feeding on the surface and disappeared.


The Third River, also known as the Yantecaw River,[1] is the third (upstream) main tributary of the Passaic River in Passaic and Essex Counties, New Jersey in the United States.
The river originates in the Great Notch Reservoir in Woodland Park, New Jersey. It then runs through the towns of Little Falls, Clifton and Montclair. It then goes into Clifton a second time, runs through Bloomfield, through the grounds of the Upper Montclair Country Club, and then the Glen Ridge Country Club. After this, it runs by Bloomfield's North Middle School where it forms Clarks Pond which is used by the school's science classes to help teach biology. It then passes through Bloomfield's Brookside Park which was the location of a mill in the Colonial Period. It also passes next to Foley Field which is used by the Bloomfield High School football team and the town's little league baseball teams. The river then runs through multiple parks in the town of Nutley in Essex County. It enters the Passaic River in Clifton just north of the border with Nutley.
Posted by The Great Lakes of NYC at 8:42 PM