Hessian Lake with my fly rod 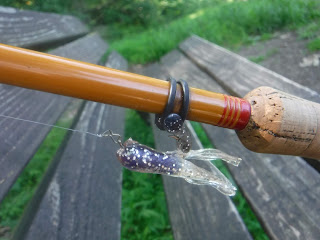 Veni Vidi Vici!  I fished Hessian Lake at Bear Mountain State Park for the first time.
When I competed as a Paralympian, I would come to the park for training and roller ski up
Perkins Memorial Drive, a four mile vertical road.  Tourist frequently drive to the top but
athletes use the road to condition themselves for competition.  Once at the top I would run down part of the Appalachian Trail to return back to the parking lot.   Until this visit,  I had never seen the lake 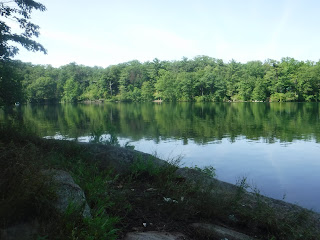 Hessian Lake is unlike most of the places I normally fish.  The water is clear and the average depth of the water is twenty four feet.  It has Brook Trout, Smallmouth Bass and panfish.  At it's deepest point,
it is forty feet deep. 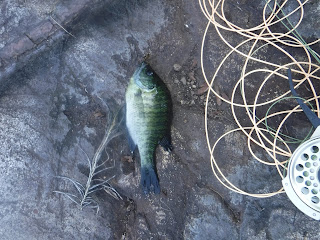 My first try at catching fish here was with a crappie tube.  It didn't catch anything but in
fairness, nothing caught fish this afternoon unless I was fishing on the westside of the lake.
The temperature was in the nineties!  On the westside, the lake was in the shade of the mountain.
It made all the difference after 5 PM. 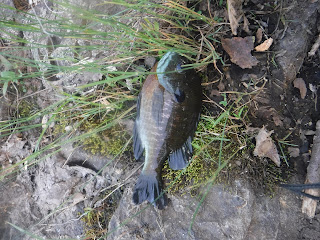 The crappie tube did get a few takes which I believe were aggressive, immature, bluegills.
They will attack anything. 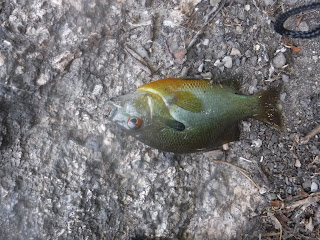 After having no success with softbaits, I switched to another go to trout fly, I like to fish, the Zug Bug.  It is a nymph pattern that I often carry( unless I'm fishing for Northen Pike). 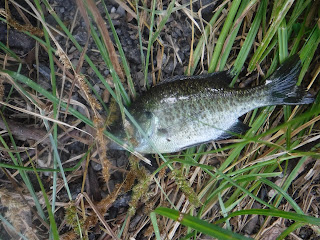 On the westside of the lake, I found openings which allowed me to have access to the shore;
even tho there were lots of  steep on that side.  I only wear Adidas Gore Tex boots when
I fish which gives me the added advantage of being able to stand in shallow water while I fish.
Sometimes, this means I can stand where others end up being wet, with soggy socks. 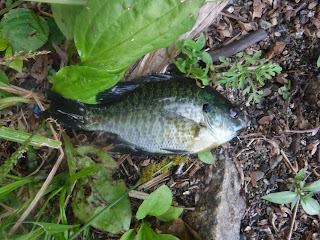 Fish were cautious and after getting one or two fish in a particular spot they would
disappear and I would move on to the next opening. 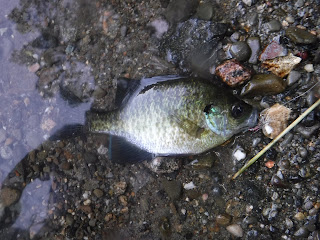 These were not the biggest fish but they were the only fish that anyone was catching between
5 and 7 PM.  Bass were not seen in the shaded area of the lake this afternoon. 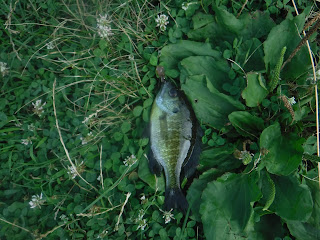 Even "lay downs" were not providing more than two fish. 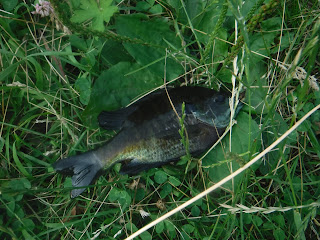 I worried while walking around the lake that I might step into or on poison ivy or a poisonous snake. 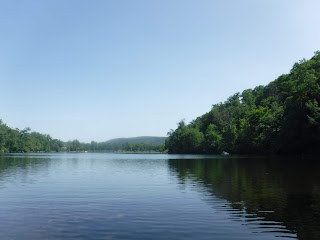 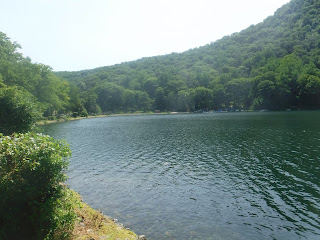 Looking west on Hessian Lake, in the distance is the boat concession.  At 7 PM, that area
was shaded and it produced some nice bluegills. 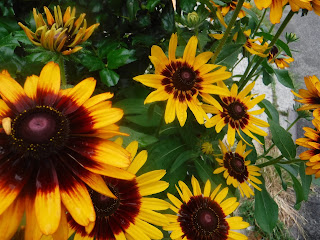 Hessian Lake, formerly known as Highland Lake and also Bloody Lake, lies at the foot of Bear Mountain on a plateau nearly 1,000 feet above the Hudson River. Dunderberg runs along from Jone's Point (Caldwell's Landing), until it merges into Bear Mountain, and the chain is continuous until it culminates in Bald Rock, Mount Independence, Cro' Nest, and Storm King, which form the highest and most nothern part of the Highlands.

The Native Americans that inhabited the mountains from Dunderberg to Cro' Nest were part of the Lenni Lenape nation. On the banks of the Sinnipink, as Hessian Lake was then known, the principal village of the Waoranecks was situated.

Stephanus Van Cortlandt, who owned a tract of land north of Anthony's Nose, purchased several hundred acres including Sankapagh Creek and Sinnipink Lake, and was secured by patent. The Waoranecks were then fighting the Warranawonkongs, by whom they were subdued. A few years afterward, the entire tribe was scattered throughout Pennsylvania and its identity was forever lost. With the departure of the Waoranecks the Native American history of Sinnipink ended.

In 1775, when Forts Montgomery and Clinton were erected to guard and obstruct the Hudson, Highland Lake still retained its Native American name of Sinnipink. The forts commanded both river and lake. Outposts were formed and fortified at intervals along Popolopen Creek and on the shores of Sinnipink. Old earthworks at the north end can still be traced. A clump of cedar trees has ground around them, and few know of their existence today.

On October 6, 1777, before dawn 2,000 English, Hessian and Tory troops quietly left Stony Point. Colonel Beverly Robinson, an American Tory, whose house stood until two years prior on the east side of the Hudson and was known as Arnold's headquarters, acted as guide. They marched along the foot of Dunderberg until Bear Mountain was reached. There the force was divided into two parties.

One division of 500 British regulars and 400 Hessians, under command of Colonel Campbell, took a route back of Bear Mountain and came out on Popolopen Creek about four miles west of Sinnipink. They advanced rapidly down the creek until Slaughter Hole was reached. This whirlpool was then known as Hell Hole, and the superstitious believed that it was bottomless. Here the Americans had three field pieces mounted on a bank overlooking the narrow ravine. When Campbell's detachment entered the defile a shower of grape and cannister swept the ranks. In a moment the column was thrown into confusion, and the mountaineers followed up their advantage by hurling rocks into the ranks of the panic-stricken soldiers.

Colonel Campbell now saw that unless he quickly dislodged the patriots his division would be annihilated. He ordered 300 men to scale the bank and capture the cannon. The Americans numbered hardly fifty, but they fought like heroes, and when compelled to retreat they hurled their field pieces into the bottomless hole and made their escape to the fort. Nearly 200 redcoats found a grave at Slaughter Hole.

While this fighting was going on at the north end of Sinnipink, General Vaughn and Sir Henry Clinton, with 1,200 troops, took the old road through Doodletown and up to the east shore. Here the pass is very narrow. The lake washes it on one side and the steep bank of the Hudson lies on the other. At this narrow and dangerous spot there was a strong outpost. The Hessians were in the lead and boldly attempted to carry it. They were repulsed again and again with great slaughter. General Vaughn, seeing this, ordered them to the rear, and the redcoats charged the works, which were quickly carried. Two hundred and fifty Hessians fell in trying to take the outpost. Their bodies were thrown into the lake, which according to witnesses, was red with Hessian blood for several days after. Since that time Sinnipink was known as Bloody, or Hessian Lake.

Hessian Lake is in Orange County, New York, and is now used for recreation purposes. It has a normal surface area of 45 acres. It is owned by NYS Parks and Recreation Palisades.
Posted by The Great Lakes of NYC at 9:03 PM