Three in one - Turtle pond, The Pool, The Loch and The Meer 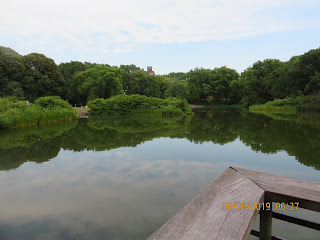 Today, Turtle Pond, in Central Park was my first stop.  Central Park's Turtle Pond is famous
for one thing, smallmouth bass.  This is a unique fishery because it is located in the
center of New York City, just a few blocks from Times Square. 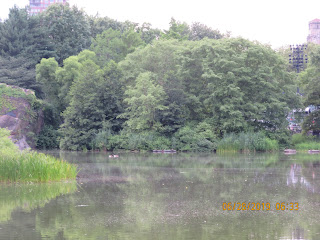 Unfortunately, there is limited access to this pond.  The Central Park Conservancy is anti fishing.
Since I began fishing in Central Park, in 2004. The Conservancy has deliberately erected fences and planted shrubbery at the shore line of all 5 lakes in the park. 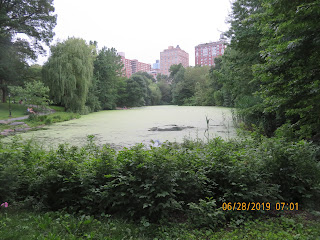 Since there was no fishable access at Turtle Pond, I went back to the subway and took
the train to 103rd street.  I hope to fish for a few largemouth bass in the fishery known as The Pool.
It was covered in duck weed. So I walked to The Meer at 110th Street. 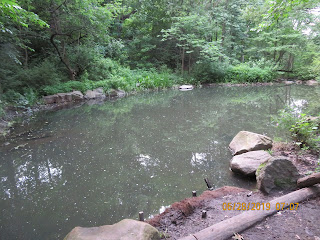 This is a picture of the newly created Loch between The Pool and The Meer at 110th Street.
There are fish in the Loch, mostly "club size bass (8" - 12"). The Loch is swallow, less
than 3 feet but it is up to 25 feet wide at some points. 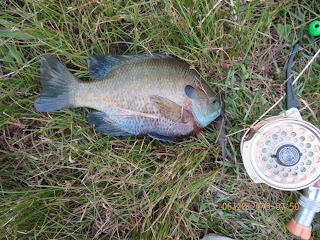 This bluegill slammed my soft bait, fished under an indicator in The Meer. 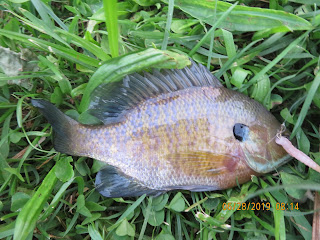 My second fish took a "Trout Magnet" as I walked around the edge of The Meer. 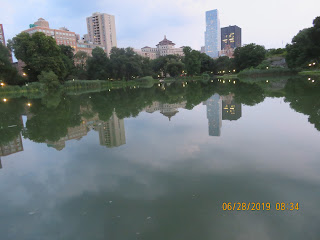 Looking south at The Meer 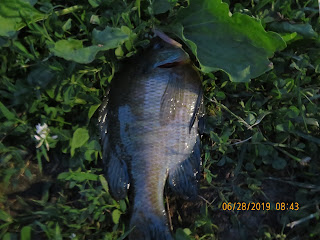 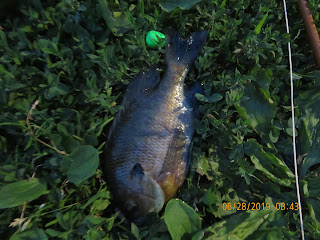 Fourth fish and the sun set!


Like all of the other water bodies in Central Park, Turtle Pond is man-made, filled with New York City drinking water. It is the  to five species of turtles who live in the Pond year round. It is said that many of these turtles started out as pets in city apartments, but eventually outgrew their urban accommodations, and were brought to the Park by their former owners. The most common species in Turtle Pond is the Red-Eared Slider, which you can identify by the small red spots around their ears. They love basking in the sun on flat logs or rocks, which makes the  of Vista Rock the perfect spot for their sun bathing activities. When the sliders are provoked, they quickly slide back into the cool waters of the Pond. Turtle Pond has the distinction of being the most recent water body added to the Park's design.
In 1937, the receiving reservoir of the old Croton Water System was filled in to become the Great Lawn, and only a small hard-edged pond was left as a reminder of the once-vast reservoir. Restored by the Central Park Conservancy in 1998, the Pond was reconfigured to a more naturalistic shape and a nature blind was added to the Pond's northern shore, so Park visitors could quietly observe the Pond's wildlife without interfering with their natural habitats. The beautiful aquatic plants on the shoreline provide a habitat for birds, dragon and damselflies, and, of course, all those turtles!

With its grassy banks, weeping willows, and rushing waterfall, the Pool is one of the most idyllic spots in the Park. Central Park's designers, Frederick Law Olmsted and Calvert Vaux, constructed the Pool by damming up a natural stream that was known as Montayne's Rivulet. They sent the water along a northeastward course to form both the Loch and the Harlem Meer. Today, the water that gushes out of a grotto on the Pool's southern shoreline is in actuality New York City drinking water that comes from a pipe hidden deep in the rocks. Many species of birds, fish, and amphibians can be seen at the Pool. In 2003, Central Park Conservancy completed a  of the Pool, protecting it as a  environment for wildlife and a picturesque landscape for Park visitors.

Winding through the Ravine, the Loch, Scottish for "lake," is partially fed by a natural watercourse, known in the 17th and 18th centuries as Montayne's Rivulet. It flows under Glen Span and Huddlestone arches before connecting to the Meer. The stream, designed by Frederick Law Olmsted and Calvert Vaux, is dammed in several places to  three magnificent cascades, some of the greatest features of engineering and art.


Central Park designers Olmsted and Vaux named this man-made water body "the Meer" — Dutch for "lake." It memorialized the former separate village of Harlem that was settled in the 17th Century by European settlers and included the upper regions of Central Park.
Today, families flock to this  for catch-and-release fishing, skating and swimming at Lasker Rink and Pool, and exploration at two nearby playgrounds. The Harlem Meer is also a thriving wildlife habitat and  to fish, turtles, and waterfowl. Several varieties of trees, including oak, bald cypress, beech and gingko, surround it.


On the northern shore of the Meer stands the Charles A. Dana Discovery , a visitor center run by the Central Park Conservancy. The Center hosts free community programs, exhibits, and holiday celebrations including the popular Halloween Pumpkin Sail and winter Holiday Lighting. There's also live music on the plaza in the summer at the Harlem Meer Performance Festival.


What we now know as Central Park has a rich social  that dates back to well before the current urban oasis was constructed in the mid-nineteenth century.  One such example is the story of Seneca Village.  It was one of the very first African  communities in New York City and existed from 1825 through 1857. It was located between 82nd and 89th Streets and Seventh and Eighth Avenues in what is now a the part of Central Park just west of the Great Lawn. It was also Manhattan’s first significant community of African American property owners. By the 1840s, it had become a multi-ethnic community of African Americans, Irish, and German immigrants, and perhaps a few Native Americans. In 1855, the New York State Census reported approximately 264 individuals living in the village. This included three churches, as well as a school and several cemeteries.  Good  for the residents of the city in general was bad  for the residents of the tiny community – within two years Seneca Village would be razed and its identity erased by the creation of Central Park.