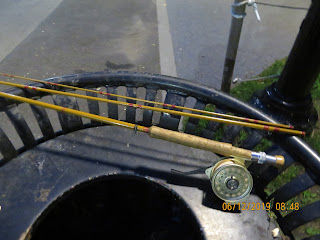 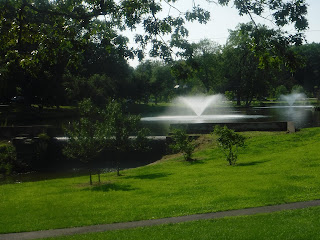 I went back to Hughes lake this afternoon with some "Gravy Train" dog food.  I bought it
awhile ago to try in Prospect Park.  If you have ever heard of this dog food before, you know it is supposed to make it's own gravy when water is poured on the dog food.  My hope was, carp will
love it. 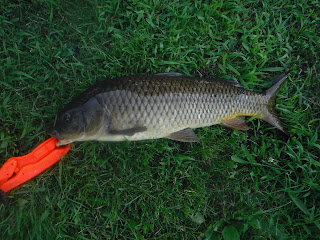 I have not tried to catch carp at this lake in more than a year.  Would carp come up to feed on the surface as they have in the past?  There were a few fishers present on this hot afternoon.  It was so warm that no one was sitting in the sun to fish. 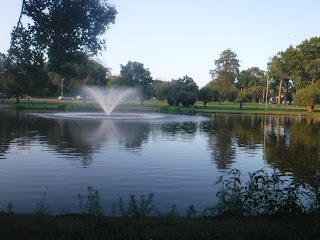 I sat in the shade and began to throw handfuls of the dog chow onto the newly renovated lake.
Nothing happened.  About an hour later still no activity on the lake surface.  My hopes had been placed on the idea that Gravy Train would release a scent in the water and attract carp to
eat.  After about 90 minutes I saw swirls in the water, maybe 100 feet from where I sat. 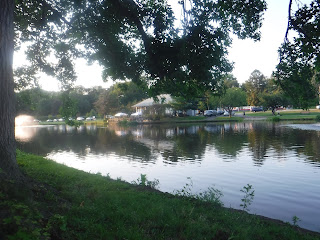 Lots of swirls, as carp were eating dog food on the surface again at Hughes Lake. It was
time to get my deer hair flies out and try to catch carp .  I saw the feeding pattern changed to carp eating about 20 feet from shore; instead of 5 feet from shore.   I had to make several presentations
with carp,you must do what their behavior dictates.  I finally hooked one. That carp made my drag SCREAM as it pulled line from my reel.  Five minutes later the carp was still online and making serious   runs in the lake.  It took more than ten minutes to tire the fish and bring it to hand. 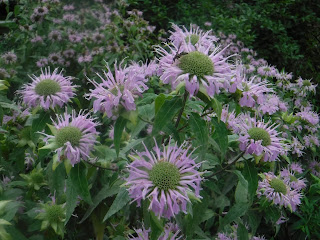