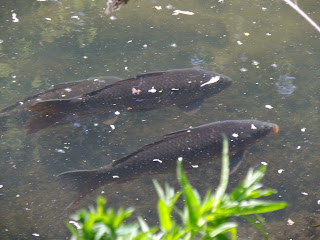 The Saw Mill river is proving to be a great place to sight fish for carp.  It did not take
me a long time to locate carp sunning themselves. 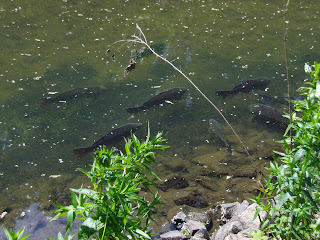 It was not difficult for me to sneak up on them in the river.  I am standing a little behind them
and the sun is in front of me. 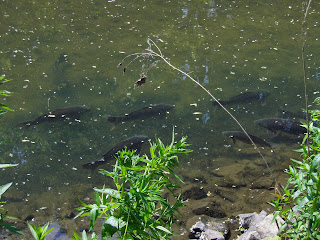 I did not even attempt to throw flies at these fish, at this time.  My goal was to locate them
and formulate a plan of attack.  But it was tempting! 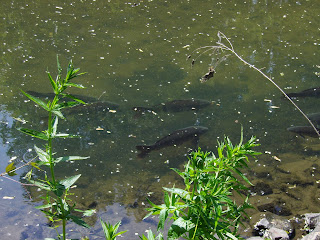 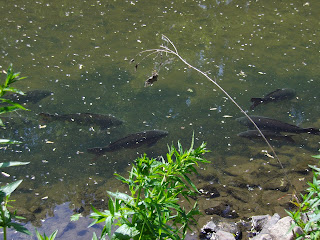 Just before I cast a fly at a carp, I imagine what can go wrong while playing the fish.
This allows me to give the carp a free run.  After that first run, I apply tactics to tire
the fish.  I try to stay relaxed as I play the fish. 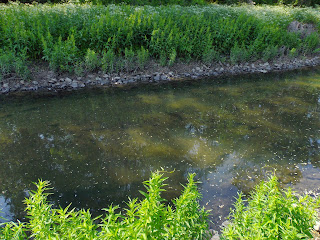 The river is almost crystal clear.  I also saw bluegills here and there. 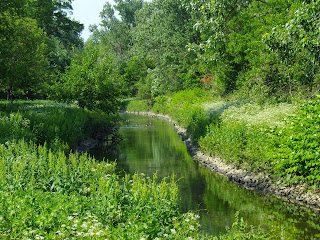 The river looks like a drainage ditch here but it is still a long way from Yonkers. 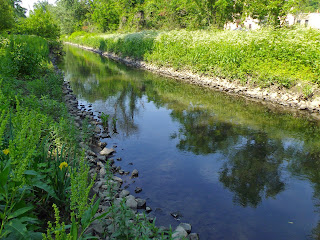 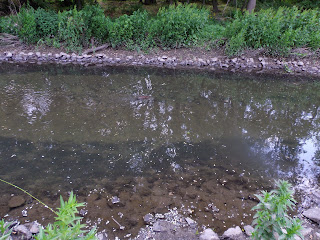 It is hard to see but there is a big brown rodent swimming in the Saw Mill ( a little right of the
picture's center). 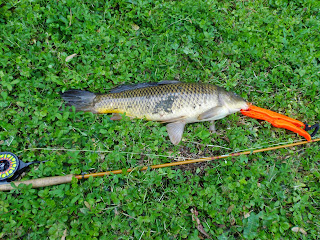 As soon as I saw the carp go into a feeding mode, I decided to use an egg pattern drifted
into the feeding zone of the carp.  It had been awhile since I have had to use this technique.
The first few casts were off.  Eventually, I got the drift to stay in the feeding zone but it was
still startling to see it work.  When he took it, I hesitated just before setting the hook. 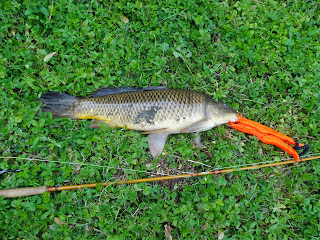 I was worried about pulling the fly out of the carp's mouth.   The carp fought hard and long.
It made several runs in the river before tiring.  I used my Fenwick "Floater Bum" fiberglass fly
rod (3 piece, 7 wt).  So the carp was out gunned from the start. 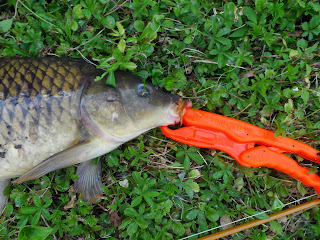 If you look closely you can see the egg pattern stuck in the upper lip of the fish.  In carp fly fishing
"Presentation" is everything, not the fly.

The Saw Mill River is a 23.5-mile (37.8 km)[2]:9 tributary of the Hudson River in Westchester County, New York, United States. It flows from an unnamed pond north of Chappaqua to Getty Square in Yonkers, where it empties into the Hudson as that river's southernmost tributary. It is the only major stream in southern Westchester County to drain into the Hudson instead of Long Island Sound. It drains an area of 26.5 square miles (69 km2),[2]:9 most of it heavily developed suburbia. For 16 miles (26 km), it flows parallel to the Saw Mill River Parkway, a commuter artery, an association that has been said to give the river an "identity crisis."[4]