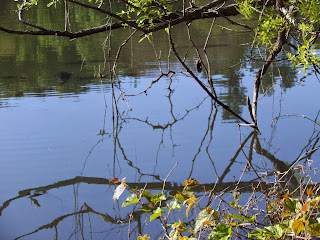 I received a tip about the Saw Mill River.  My camera does not have a polarized lens, so you are only able to see the carp suspending in the upper third of my photo.   But there are at least a dozen carp in this picture. 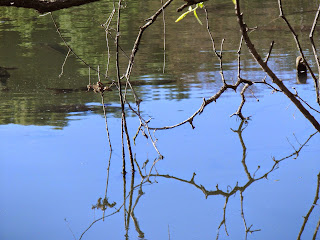 Here is another view.  These carp are not feeding, just holding about a foot beneath the service.
Up until I got a tip about the Saw Mill River, I did not know where to start my search for fishing in the river.  At one time the river was stocked with trout.  I do not know if that is still the case but a local told me that he had caught a nice Brook Trout using an ordinary worm! 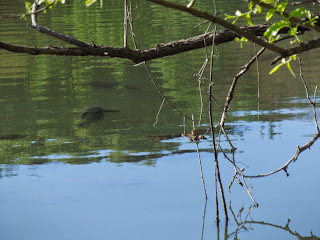 This is a better photo of the torpedo size carp near this tree.  Since this was my first visit I tried to inspect the west side first.  I did not see many fish.  I had two carp take notice of my soft hackle. 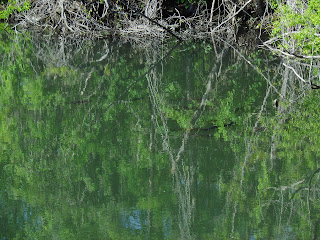 Looking north; each shadow is a carp.  I plan to walk the east side of the river on a future visit.
Google Maps shows possible access points further north; which look fishable too. 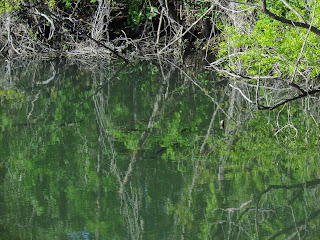 What was really exciting was the fact that I saw a dozen or so young carp (about five pounds or less)
swimming under a viaduct about a half mile from the area I fished.  It appears this area on the Saw Mill has bass, carp and a few trout.  I had to walk about an hour to reach this place ( both ways).   I enjoyed the walk going back to the train station because The Saw Mill River has fish. 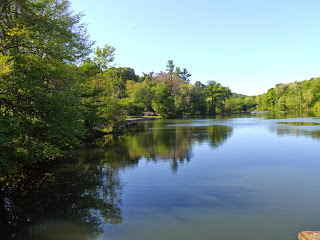 
The river affords some of the few remaining open spaces in Westchester County. Near Ardsley and Dobbs Ferry, the river passes through V. E. Macy Park, popular for picnicking and fishing in Woodlands Lake.[76] Butternut Ridge Park contains Tarrytown Lakes and a hiking trail.[77]
Two bicycle trails run along parts of the river: the North County Trailway and the South County Trailway, which run from Van Cortlandt Park in the Bronx to Putnam County.[77]
The Saw Mill was also known as the closest trout fishing river to New York City. In the early 2000s, it was stocked with a few hundred trout each year.[78] The lower river specifically is a good trout river.[79]
Posted by The Great Lakes of NYC at 7:57 PM