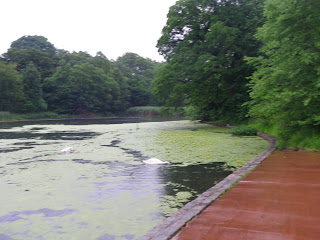 I am an urban fly fisher and proud of it. I travel by public transportation to local waters on both sides of the Hudson river. Too often I hear people lament about not having the time or money to go fishing, especially fly fishers. The purpose of this blog is to show that there is excellent fishing in and around New York City. All of it can be had without having to own a car, without having to make a reservation,or hire a guide.

Brooklyn is my home borough. Most of the fly fishing I do is done in the waters of Prospect Park.
Prospect Park lake is a 60 acres, man made fishery whose claim to fame is the fact that it has the largest concentration of large mouth bass on Long Island. It is not easy but you can catch a five pound bass in this lake. All fishing here and in New York City is catch and release. New York State law requires that everyone over the age of sixteen have a current fishing license. Prospect Park lake holds: large mouth bass, Blue gills, carp, channel catfish, crappie, golden shiners, yellow perch and pickerel.

At last count I have fished all but two of the public lakes and ponds managed by the New York City Department of Parks. There are a total of twenty five lakes and ponds open to the public. Staten Island has the most with ten. Brooklyn has one. The Bronx has two. Queens has eight (two of which are brackish water). Manhattan has four, all within Central Park.