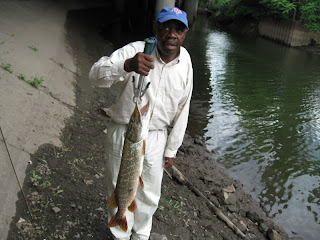 I went to New Jersey, this afternoon to fish for Northern pike. No 3 wt fly rod today. I brought an 8 wt. Yes pike are a short drive from New York City. Just forty minutes by public bus from Times Square! Most people will travel north to Canada for a chance at a Northern pike. My total cost is about $13.00, round trip door to shore.

The weather was hot and humid. I sat on the shore and tied on my leader and then my fly using a mono loop. As my fly reached the shore after my first cast, my polarized glasses allowed me to see a large shadow moving slowly beneath the water. It was a pike. It was a pike about a foot or so from my fly. From past experience I know that a slow moving pike has not made a decision to attack but is merely curious. So I tried a number of different retrieves until that fly got caught in some debris on the river bottom. All the while carp were swimming by me. Since it was almost the bottom of the tide , I packed up and left.

I fished the Passaic river this afternoon on an out going tide. I brought the 8 wt fly rod because I hope to catch a Northern pike. Yes, there are pike within