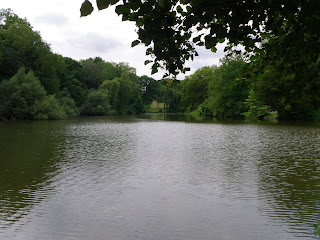 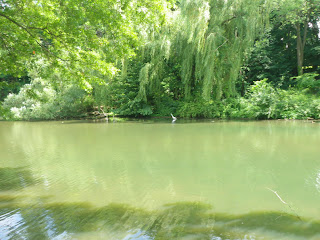 I "found" another pond in Queens, called Golden Pond. When I started to fish in other boroughs
I had no idea that there would be more than two dozen bodies of water in the city where I could fish. Some I heard of by word of mouth, others by literally stumbling into them. But now I have fish all that are open to the public. There are others but they are within grave yards, private or not officially open to the public.

Golden Pond appears to be a carp only fishery; because that is all that I saw on my first visit re. It is small, shallow pond within one hundred yards of Little Neck Bay. When I visited, the water was clear at the western end of the pond which means sight fishing for carp is possible. The pond seems to be deeper on the southern shore but there are more trees in the water. I suspect big fish are living under and near those downed trees.