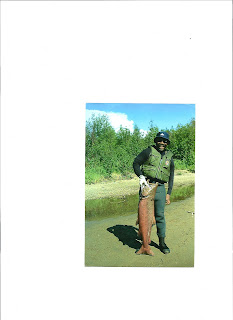 I caught this fish in Anchorage. A friend of mine moved to Alaska when he retired and he invited me to come up and fish for salmon, King Salmon. At that time I had no idea what a "King" was.
I had seen farmed salmon at the super markets but that was it. I had been to Alaska before; my first trip to Alaska I competed at the Olympic cross country ski trials in 1992. But this was the first time to go there when there was real day light, 22 hours of it. We spent twelve hours fishing the first day. It was on the second day that I snagged this beast. The fight between me and this 44 inch king salmon felt like life and death. I stopped counting the tail walks. What was truly amazing was that after all this fish had done just to get to Alaska and spawn he was still able to manhandle me. what a fight! The king was 44 inches long and produced 38 Lbs of fillet.