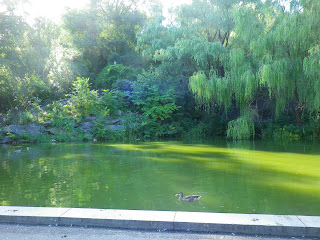 A friend asked me if I had ever fished in this
park. I hadn't even though I walk past it when
I fish The Meer, in Central Park 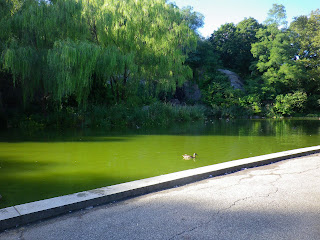 About twenty years ago a small pond was added
to the park. There are fish but there are way too
many turtles for my liking. 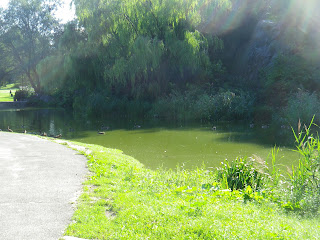 It is a pretty setting when you sit on a bench
and look at the pond and it's waterfall. 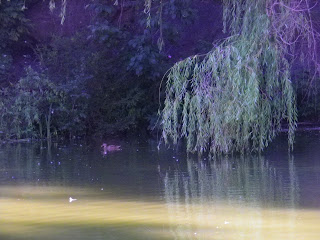 Morningside Park takes its name from the eastern side—where the sun rises in the morning—of the rugged cliff of Manhattan schist which separates Morningside Heights on the west from the Harlem Plain to the east. The area was formerly known as Muscoota to the Indians of the Harlem Plain, Vredendal (Peaceful Dale) to 17th century Dutch settlers, and Vandewater Heights after the Dutch landowner who acquired property here in 1738. On September 16, 1776, during the Revolutionary War Battle of Harlem Heights, colonial forces retreated on a road through the area. Three blockhouse fortifications were built here and put to use during the War of 1812.

In 1867 Andrew Haswell Green, Commissioner and Comptroller of Central Park, recommended that a park be located in Morningside Heights. He argued that it would be "very expensive" and "very inconvenient" to extend the Manhattan street grid over the area’s severe topography. The City of New York was granted jurisdiction over this property in 1870. Construction of Morningside Park was delayed, however, because the Board of Commissioners for Public Parks rejected the design proposals submitted by Parks Engineer-in-Chief M.A. Kellogg in 1871, and by landscape architects Frederick Law Olmsted and Calvert Vaux (co-designers of Central and Prospect Parks) in 1873.

Architect Jacob Wrey Mould was hired to rework Olmsted and Vaux’s plans in 1880. He designed the promenade and buttressed masonry wall that encloses the park along Morningside Drive. The 30 foot-wide walkway was constructed as a series of esplanades, linked by steps, with semi-octagonal bays providing visitors with places to rest and to enjoy the view. Although a construction contract was awarded in 1883, Mould died in 1886 before the work was completed.

Fourteen years after their original proposal was rejected, landscape architects Olmsted and Vaux were hired in 1887 to continue improvements to Morningside Park. They enhanced the park’s natural elements by planting vegetation tolerant of the dry, rocky environment. Two paths—one broad, one meandering—traversed the lower portion of the park. Retained as a consultant, Vaux saw the work to completion in 1895, the year he drowned in Gravesend Bay. Parks Superintendent Samuel Parsons Jr. wrote of Vaux’s work, ". . .perhaps Morningside Park was the most consummate piece of art that he had ever created."

The park’s design continued to evolve in the 20th century. Monuments installed in and around the park included Lafayette and Washington (1900) by Frédéric-Auguste Bartholdi, the Carl Schurz Memorial (1913) by Karl Bitter and Henry Bacon, and the Seligman (Bear and Faun) Fountain (1914) by Edgar Walter. Between the 1930s and the 1950s playgrounds, basketball courts, and softball diamonds were constructed in the east and south parts of Morningside Park.

In 1968 student and community protests halted construction of a large gymnasium in the park intended for the use of Columbia University and the public. The excavated foundation crater was converted into an ornamental pond and waterfall in 1989-90 as part of a $5 million capital reconstruction of the park from 110th to 114th Streets. The project also included installing new play equipment, creating a picnic area, planting new trees, and rebuilding the ballfields.