A few Bluegills and a Crappie 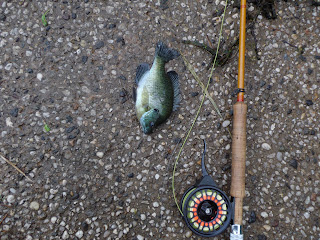 I sat for a few hours in a corner of Prospect Park Lake, chumming some cracked corn for carp.
Only one koi was spotted.  After I left that location I began to fish with  some of my favorite
flies, pheasant tails, zug bugs and flash back hare's ear.  I like to start small so I used # 14. 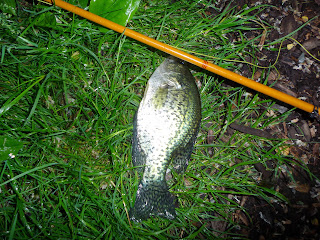 As I walked the area known as the Lullwater, I started to fish using single hand Spey Casting
techniques.  Fly Fishing in a New York City park does not allow for traditional back casting.
First I caught a few small bluegills ( less than 6").  There a few spots that I know hold bass and
crappie.  I made several cast and then I felt a hit.  I thought it might be a small bass.  The fish resisted
my attempts to hand strip the line.  I kept the rod tip down so I would not lose the fish.  The fish
fought hard and tried to run.  But I started to retrieve line.  As my furled leader came near the rod tip
I raised the rod.  I had hooked a 7or 8 inch crappie on a #14 hare's ear.
Posted by The Great Lakes of NYC at 6:22 PM