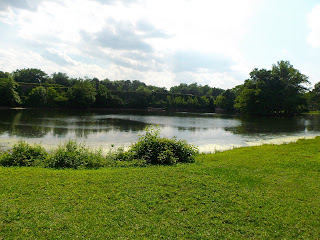 Crystal Lake is another urban lake in New Jersey.  The first thing I noticed were the koi.
There are at least three orange koi and one white koi in this lake. 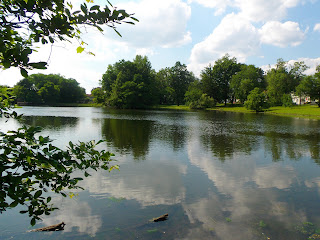 The water here is crystal clear.  I made a short stop here because I wanted to also see
Overpeck Creek which is about an hours walk south west of Crystal Lake. 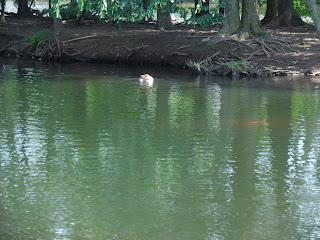 There are 3 orange koi sunning themselves in the upper right hand corner of this photo. 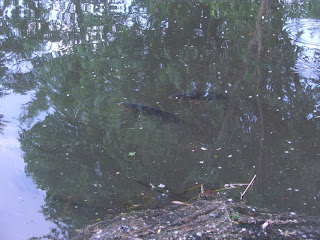 At  Overpeck Creek I found carp clooping while eating midges near the surface.
This was a complete surprise. 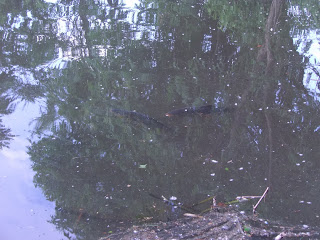 There were at least a dozen carp tailing and eating on the surface.  I quickly rigged my
March Brown Fly Rod.  I had my 6 wt, 7 piece, 8'6" rod.  I bought this rod because it
is a faster rod. 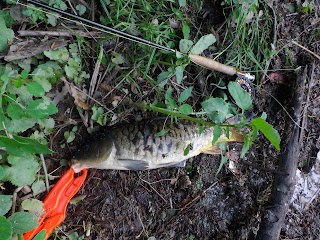 Once I put the rod together, I began to fish for the carp in this little cove.  I hooked this
beautiful, rare Mirror carp.


From Wikipedia, the free encyclopedia

Overpeck Creek is a tributary of the Hackensack River, approximately 8 miles (13 km) long, in Bergen County in northeastern New Jersey in the United States. The lower broad mouth of the creek is part of the extended tidal estuary of the lower Hackensack and of the adjacent wetland region known as the New Jersey Meadowlands.[1]
The upper creek flows through suburban communities west of New York City. The creek rises in Tenafly, on the west side of the Palisades, approximately 1 mile (1.6 km) from the Hudson River. It flows south-southwest through Englewood, past Teaneck, Leonia, and Palisades Park, where it flows past the Overpeck County Park. It joins the Hackensack on the south side of Ridgefield Park and the east side of Little Ferry.
In colonial times, the creek was called "Tantaqua" and was the site of a Hackensack (Native Americans) village. An attempted European settlement, Achter Col, in 1642 was aborted after Lenape retaliations for the Pavonia Massacre. Later 17th and 18th century settlements were collectively known as the English Neighborhood. The creek lay along the main land route west of the Hudson and provided a consistently difficult barrier for transportation in the area until the construction of modern roads and bridges in the 19th century. Development of the region was facilitated by the West Shore Railroad and the Northern Branch, latter of which partially runs parallel to the creek. Restoration of rail service is the object of the Northern Branch Corridor Project.
Like the other tributaries of the Hackensack in the Meadowlands, the creek has suffered from severe pollution in the 20th century during the era of heavy industrialization. During the 1950s, tide gates were installed on the creek that largely cut off the tidal flow into the surrounding wetlands. The restoration of the surrounding wetlands has been an ongoing project of several state and private agencies.
Posted by The Great Lakes of NYC at 11:37 AM